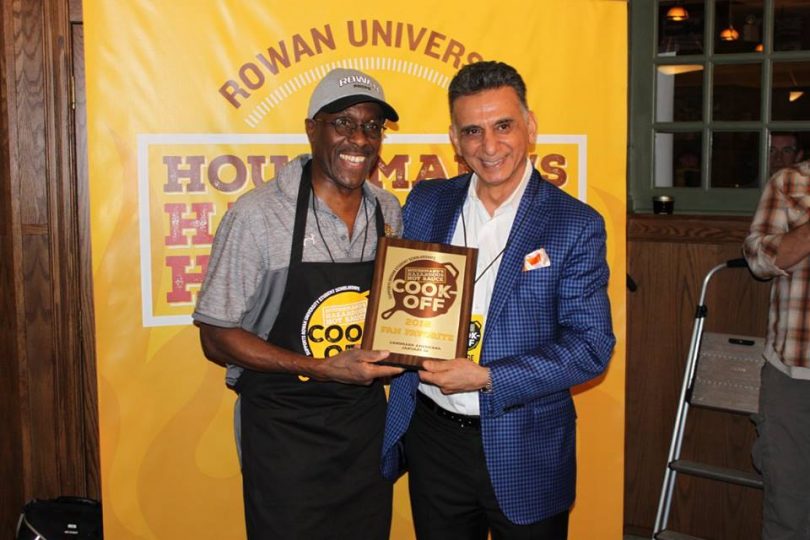 Jamaican native Derick “Ringo” Adamson, the cross-country and track-and-field coach at Rowan University in New Jersey, took first prize in the institution’s cooking contest to celebrate National Hot Sauce Day on January 22, 2018. The event was held at Landmark Americana in Glassboro to raise funds for student scholarships. The contestants battled to see which of them could create the best dish using Houshmand’s Hazardous Hot Sauce, a line of commercial sauce products developed by the University’s president Ali Houshmand in support of his students. The line of hot sauces was created from a passion for the hot peppers that the president grows and tends himself. Since its launch in October 2017, the University has sold over1,500 jars of sauce, as well as hot sauce-related gear, and has raised more than $18,000 for student scholarships.

The only rule for the cooking contest required the use of one of the Houshmand’s hot pepper sauces as an ingredient. Adamson, who took the Fan Favorite Award in addition to First Prize, created “Ringo’s Island Surf and Turf,” a dish comprising New York strip steak marinated in hot sauce paired with fresh salmon with a mango salsa and avocado and saffron rice. The dish was served in an authentic coconut cup imported from Jamaica. Adamson garnished his dish with a paper flag from his native Jamaica. Along with being a fan-favorite cook, Adamson is a two-time Olympic runner for Jamaica, He said he had been determined to win the cooking contest because “when I compete, I go all the way.” He said he is well-known for his love of hot peppers, a love that began during his childhood in Jamaica where “they believe food can be medicine,” he said, noting that Jamaicans are rarely sick, even with the common cold.

The origins of National Hot Sauce Day are unknown, but it has steadily gained in popularity as more cooks and diners express their love of sauces made of hot peppers. Different cultures use different chili peppers as their base. In Jamaica the scotch bonnet pepper forms the base of most hot pepper sauces.