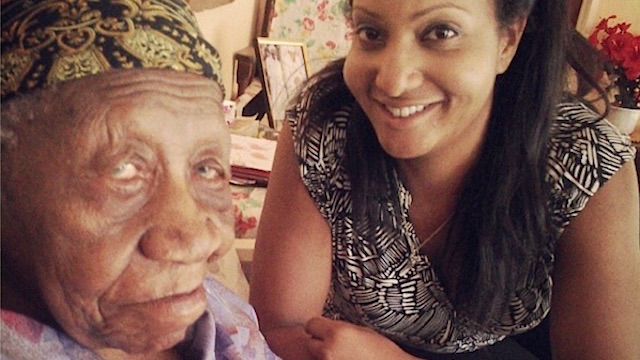 Viola Moss Brown of Duanvale, Trelawny, 115 years of age, is now the second-oldest person in the world, after the passing of Susannah Mushatt Jones, who died in New York City today at the age of 116. Brown still lives in the house where she was born in 1900. She was confirmed as the oldest person in Jamaica by the Gerontology Research Group. Brown is also the mother of the world’s oldest living child, her first-born son, Harold Fairweather, who turned 95 in April 2016. Brown received congratulations from Britain’s Queen Elizabeth upon reaching the age of 115. Emma Morano of Verbania, Italy, who at 116 is just a few months younger than Jones, is now unofficially the world’s oldest person. Jamaica’s Brown is known as “Aunt V,” and she was born in 1900. She attributes her longevity to “God’s blessing” and coconut sauce, or “run down.” Since the death of her husband who worked as a keeper at the Duanvale Cemetery, Brown has retained all the records of the cemetery, for which the parish council expressed its thanks as other Jamaican cemeteries lack accurate records of burials. According to Brown’s family, there are plans to establish a foundation in her honor.