Watch 800 Jews, Christians, Muslims Sing Marley’s “One Love” in Jerusalem as a Sign of Unity - Jamaicans.com 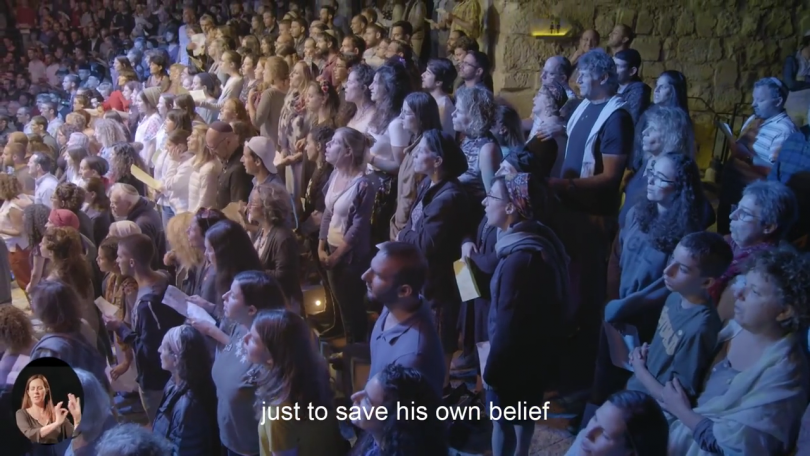 On June 14, 2018, a group of 800 Jews, Christians, and Muslims gathered at the Tower of David Museum in Jerusalem, Israel, to sing “One Love,” a song by Jamaica’s Bob Marley, in three languages and three-part harmony in a demonstration of unity. The event was organized by Koolulam, a social musical project that gathers thousands of people from all walks of life in Israel, films them singing together, and shares the event on social media. The “One Love” event, which took place at five minutes to midnight on June 14th, was timed to coincide with the Eid al-Fitr, a holiday that marks the end of Ramadan, a Muslim month devoted to introspection and fasting. 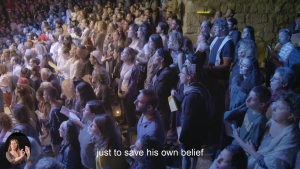 It also coincided with a visit to Jerusalem of Kyai Haji Yahya Cholil Staquf, secretary general of Nahdlatul Ulama, which is based in Indonesia and is the largest Muslim organization in the world, having over 60 million members. Staquf had previously viewed a Koolulam video and contacted the group to inform them of his visit to Israel, saying he wanted to participate in an interfaith social music event. At the same time, the Tower of David and Jerusalem.com wanted to sponsor such an event, said Michal Shahaf Shneiderman, co-founder and general manager of Koolulam. She went on to say that the entire event was an “amazing confluence” and fit well with the organization’s belief that every person can be a part of its event, regardless of heritage, origin, or beliefs. ““And what could be better than this historic location to host people of three religions singing together in English, Hebrew, and Arabic?” When Koolulam reached out to Muslim and Christian groups, they all came to sing, and while the events always sell out quickly, the “One Love” event sold out in seven minutes. The event began with the crowd of participants being handed lyrics sheets for the song and being divided into soprano, alto, and baritone groups. They rehearsed their parts for 45 minutes, learning the lyrics in English, Hebrew, and Arabic. The event ended at 3:30 am. Partners in Tower of David event included the Interfaith Encounter Association, Coexistence Trip Initiative, Tiyul-Rihla, the World Jewish Congress, Bayt ar-Rahmah, and numerous other local and international organizations involved with interfaith relations.