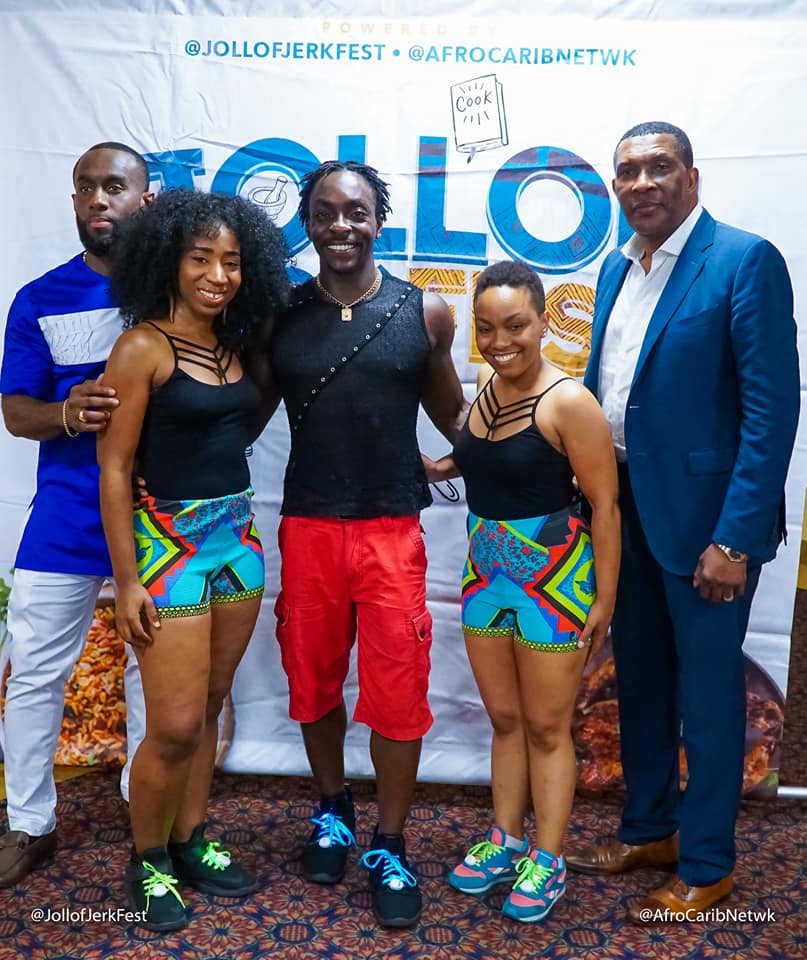 Ghanaian entrepreuner Sam Boateng decided to parlay his network of friends into a collaborative event designed to expose his Caribbean colleagues to his African heritage.  AfroCarib Network was actualised one short year ago with what is hoped to be an annual marketplace, social and networking event.  June 30, 2018 heralded the second staging of the Jollof Jerk Fest 2.0 an Afro Beats party, hosted by Ghana Elite Entertainment – held in a midtown fully airconditioned venue, I’m sure the patrons were extremely appreciative of that fact, considering the latest heatwave producing 90 plus degree temperatures.

The location and visage of the interior screamed ‘classy’ and this concept was reflected throughout the evening.  From the sparse selection of vendors,  the paying public were certainly not overwhelmed with competing interests and had the oportunity to browse at their own leisure.  I also got the opportunity to speak in depth and obtain an unhurried explanation of what they were offering and purchased very reasonably priced beads and an ice-cold Sorrel drink.   Featured vendors – Gambian Miriama Kebbe with her Beads by Xquiisite, and Abayomi Mariam Are – Nigerian  caterer whose delectable dishes looked mouthwatering and showcased typical Nigerian dishes like fried rice, plantains (Dodo), shrimp kebabs and meat pie and Sorrel – known to many in the Caribbean as a Christmas festive beverage.  There were celebrities galore and a plethora of vibrant millenials, eating and drinking, mingling and networking.  The DJs on hand warmed up with a nice selection of Afro beats, reggae and soca, and folks were eager to try out their dance moves on the well appointed dancefloor.   But I digress, what drew me to the event was the idea of a Jolloff Jerk Fest.  I couldn’t wait to try the dishes on offer included in the entrance fee.  I was disappointed with the fact that the only jerk available was chicken, but ther Jolloff rice was delectable!  Spicy and flavorful, the plaintains provide the  sweet and the crisp green salad, provided just the right amount of cool to counter the heat of the Jolloff.  A quick survey of patrons who were also partaking confirmed the concensus that the food was a hit.

Entertainment was provided by Kwabs dance troupe, comprising of founder Kwabena with Tauheeda and Richel.  Unfortunately, a prior engagement meant that I missed their performance and that of KerryDDrummer from trinidad.  Hosted by Clardav Gouoto – Ms Congo Brazzo 2017 who was accompanied by the 1st runner up  Ms. Christine Gome – both young ladies were poised and engaging as cameras clicked.  Dance music was provided by a multicultural and multinational blend of djs – DJ Notorious Inc from Trinidad & Tobago, DJ El-G representing Nigeria and Ghana, Lab Sounds out of Jamaica and DJ Birane from the Ivory Coast.

Having been exposed to the Jolloff Jerk Fest, I would definitely recommend their addition to the annual Grace Jamaican Jerk Fest – what a great way to expose even more Caribbeans to the culinary similarities – after all the concept of jerk (originally called charqui) originated with indigenous peoples and it is more than fitting that it has come full circle, from Africa to the Caribbean and now a collaboration of both.

Upcoming from this organiser is the Melanin on the Sea yacht cruise July 21st 2018, details available at Eventbrite – see you then.