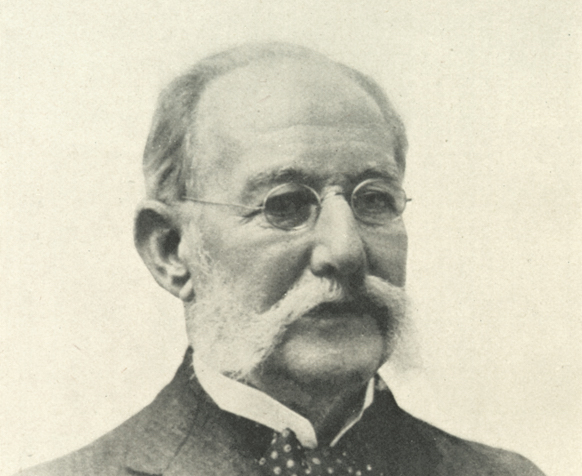 Epidemiologist and pioneer in yellow fever research Juan Carlos Finlay was born in Puerto Príncipe, Cuba in 1833 when Cuba was part of the Kingdom of Spain. His father was a doctor who had fought with Simón Bolívar. His family owned a coffee plantation. Finlay traveled to France in 1844 for his education but had to return to Cuba when he became ill with cholera. He returned to Europe in 1848, becoming stranded in England for two years due to political unrest, and upon finally arriving in France to pursue his education, caught typhoid fever and again returned to Cuba. He ultimately enrolled at Jefferson Medical College in Philadelphia, Pennsylvania, graduating in 1855. He established an ophthalmology practice in Havana in 1857 and went to Paris to study in 1860. Finlay was the first to promote the theory that mosquitoes carried yellow fever, and in 1881, presented his theory to the International Sanitary Conference. In 1882, he identified the genus of the mosquito responsible for transmitting yellow fever to humans. His theories were confirmed some 20 years later by the Walter Reed Commission, and Finlay became the chief health officer of Cuba from 1902 to 1909. Finlay was credited by Reed with the discovery of yellow fever’s vector and the means by which it could be controlled. In 1928, the President of Cuba, Gerardo Machado, established the National Order of Merit in Finlay’s name to recognize achievements in health care and medicine. In the Marianao section of Havana, a monument in the shape of a syringe honors Finlay and his discovery. Finlay was also honored with a Google Doodle in 2013 on the 180th anniversary of his birth.