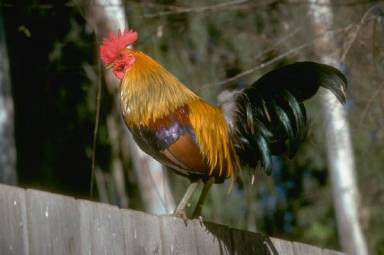 Miss Matte called, “Krum krum! Krum Krum Krum!” and the fowls came running from all directions, circling her like a pack of hungry wild dogs around the carcass of a dead swine. She throws coconut trash from a plastic basin to the ground having just extracted the milk, pouring it through a strainer into a boiling pot of peas. The poultry hastily pecks at the feeding, each one seemingly trying to out number the other in pecks. This is perhaps akin to hungry kids eating from one box of Kentucky Chicken. It’s a survival instinct; he who eats the fastest gets the most.

Miss Matte scans the gathering over and over again, only to confirm that Rusty Brown is missing. She had planned to catch it from yesterday, drench it with vinegar and coop it up, but somehow it had slipped her mind. Had she, six days time it would be devoured for Christmas Sunday Holiday Dinner, now the rooster is nowhere to be found.

Shrugging her shoulders, she makes her way back to the outdoor kitchen, “What’s the heck? You win some, you loose some,” her words in soliloquy as she kneels down to blow the fire beneath the pot. She had raised Rusty from it was a chick. A lady whom she buys eggs from at the market had given her a hen as a gift for her son’s first birthday anniversary. Rusty is one of its many, many offspring.

This cock has given her so much trouble. Numerous complaints she has received from her neighbors saying, Rusty do this and Rusty do that, when it hadn’t stepped on their white wash clothes, it either broke lampshade or pirate dish.

“Enough is enough, come next week not a God Almighty soul will have anything to say, Hallelujah! Amen,” she said as she rose from the billow of smoke above her head, while brushing her palms to and fro in finality of Rusty’s impending doom, though she hadn’t caught it yet.

“A wha rang wid dah blasted fowl yah doe ye?” screamed an angry voice from next door. It is that of Thelma Cole, “Miss Matte! Miss Matte! Me a beg y’u fe put dis rawgeil fowl yah eno, so help me Gad if a ketch it teday a swear pon Calvary’s Cross a gwain kill it.”

“What is it now Thelma?” inquired Miss Matte. “Noh tell me is Rusty again causing trouble.”

“Lawd… me noh noe wha else fe do me poe Chile,” said Matte, followed by a sigh. “How much de Red Herring cost?”

“Noh worry y’u self Matte, me hab a tin a Mackerel yah can suffice, aftarall, a Rusty still a wake me up a mawnin time, if it wasn’t fah Rusty, Brackra would a fire me laaang time.”

“Thanks so much Thelma, lickle more, me a run go look pon de pot me hab a fire.”