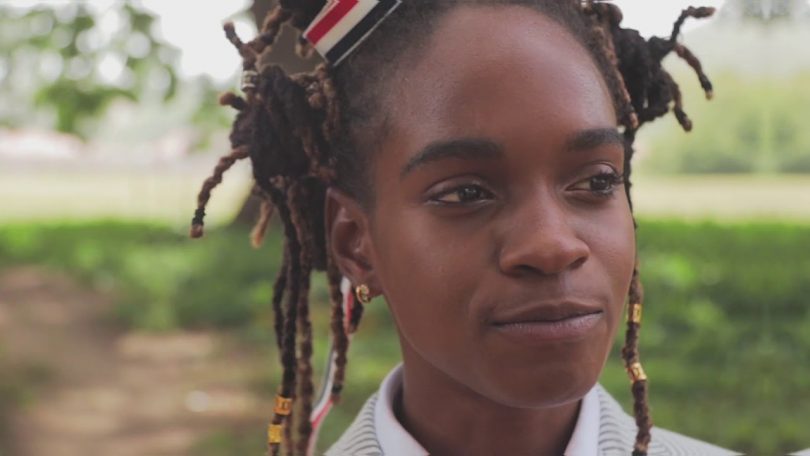 Jamaican reggae sensation Koffee, 19, has teamed up with the American fashion designer Thom Browne on a new performance video of her song “Pressure,” a tune she has performed in her live shows since 2017 but never officially released. The video is part of the online exhibition “Not in Paris,” a digital celebration of creativity launched during a time of remote interaction required by the  COVID-19 pandemic. It is hosted and curated by the German streetwear media brand and production agency Highsnobiety. This is the second collaboration between Koffee and Browne,  who designed the outfit she wore as she made history in January of 2020 when her debut album “Rapture” won the award for Best Reggae Album at the Grammy’s 62nd staging. At the Grammys, Koffee wore a black tuxedo and matching overcoat designed by Browne.

According to Browne, he decided to participate in the video project because he likes doing interesting and individual things that are new for him. He also wanted to be part of an “image piece” rather than a “fashion piece” that only fit into a season. He wanted to show how his collection evolved in the real world. He describes Koffee as a “true individual with a huge talent” and was drawn to her because he felt she adds an “interesting sensibility” to his brand. The video project was filmed in Jamaica, directed by SAMO and produced by Tamo Ennis. The singer’s stylist was David Gangel, and all fashion was designed by Browne.

In the video, Koffee wears the grey tuxedo that Browne is known for and an overcoat paired with a crop pant and black-and-white loafers. She also wears a loosely adjusted tie. Her hair is knotted on top of her head using Browne’s signature red, white and blue fabric strips as hair ties. The suit is embroidered with white anchors.

The song “Pressure” talks about the challenges of living in disenfranchised ghetto environments and finding the strength to overcome the difficult situation. At the video’s beginning, Koffee speaks to viewers, stating “No matter who you are or what you’re going through, never give up. “The lyrics “under the pressure” are repeated through the song, a reflection of the pressure experienced in Jamaica from hardships, living conditions, and corruption as described by reggae icon Bob Marley. Browne founded his fashion brand in 2001 and has provided couture-like suit displays for his shows and has even dressed athletes like Lebron James and the Cleveland Cavaliers in 2018 before their games. Browne is known for pushing the boundaries of what a suit can be.