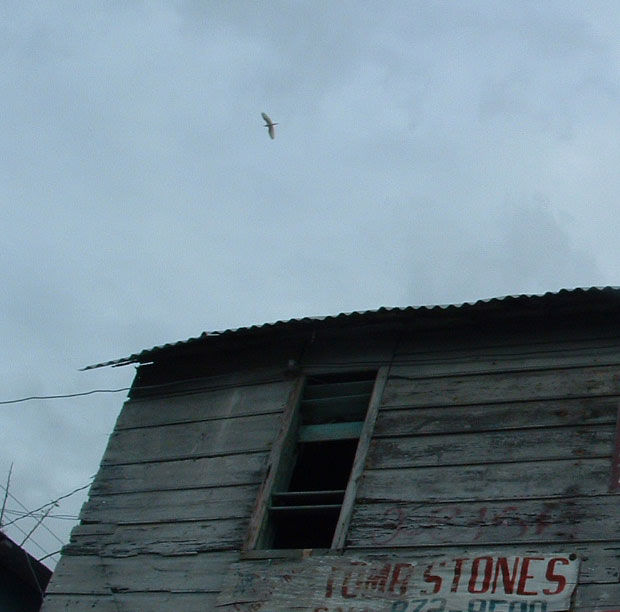 Unknown to Misses Matilda, a handful of ravens (A beg y’u pardon; black buds) are ravaging her tomatis crop. They are drilling and sipping sweet nectar from the cherry-red plumy ones. {Lawd, what a lala when she fines out.}

In her little farming plot, fenced by dried macca tree limbs, are also the luxuriant foliages of cabbage and lush calaloo sprouts. In addition, there is scotch bonnet peppers, string beans, green onions and a nice and lovely little pumpkin patch.

“A wa do dat dyam blasted tusty ramgoat deh though sah!” she hollers from the kitchen where she is making her breakfast. The ply board made kitchen is a couple yards to the back of the house but the latrine is much further.

Except for the ‘renking’ smell of the billy goat, the air is otherwise breathtaking. Every now and then a moderate breeze blows, swaying the branches of a loaded plum tree, causing quarter dozen or so extra ripe fruits to fall to the ground.  In a squabble, a big white mother sow and its nine piglets chases and grunts at each other in a bid for the treats.

Matilda leaves the kitchen heading for the verandah with her breakfast. Each halves of her tight, round and sizeable behind shakes and trembles with firm agility with every step. Her flip-flop slippers make a clip-clap sound against her multi-cracked heels and her pace is not much faster than an ‘expected’ cow.

Clearly, her housedress has seen many Christmases. Its once vibrant floral colors have long faded with the passing of time but her tie-head is sparklingly brand new. She is one short and stocky being with a vexatious look. Get her on her wrong side, then she swears like Sir ‘One-tone’ Drysdale. Everyone is mindful of her temperament even Brownie, the four-legged ‘companion’ that shares her quarters.

In her right hand, she is carrying a big ‘chip-up chip-up’ enamel mug with hot cornmeal porridge steaming from it. She pauses, take a sip then slowly continue her walk, all the time clutching a chunk of hard-dough bread in the other hand.

The gleeful looking mongrel trots besides her, wagging its tail with all its energy. “Move from yah before a pawn sinting lick y’u dung! You don’t want nyam ton-meal but you want come drink condense milk sweetened porridge, you could a bright,” said Matilda to Brownie. The poor creature didn’t even budge; instead, it just kept frisking up and down and followed her.

By this time, a feisty little cock-chicken flew up and pecked the bread in Matilda’s hand.  In a fit of pique, she flings the bread at the rooster and swears to ‘gad-almighty’ that she is going to kill the blasted fowl. Instantly the mongrel leaped to the air, caught the bread in mid-flight and darted under the cellar.

“Is jus lass week that dyam stinking fowl go fly-up mash neighba lamp shade and it cost mi money. Yes-si-deh, it go all the way in a Miss Mary kitchen go pick out the woman saulting, then ton roune tep-up tep-up pon di lady whitewash clothes all the way pon har stone heap, and so help mi Gad, ha gwain ring off it blinking neck… Anything you have and Naigah mouth deh pon it, always bring trouble an badaration, dis dyam fowl is nothing but pure crosses,” she lamented.

In the old, rickety-rackety roach infested board chair on the verandah, Matilda sat and has her porridge. “Howdy, Misses Matilda!” a limping passerby walking with what seemed like an old broomstick shouted to her. “Morning Mass Gussy!” she fires back promptly.

“How you foot, It still a bother you?” she inquires. “Lately it nuh too bad Mi- sis, see mi a stretch it out yah, doctor seh mi mus exercise it, so mi a cramble go up the road and back.”

This is much apart of Matilda’s daily routine. She will sit there, hail and wave to almost everyone. Those with time on their hand will stop for a while and chitchat. She will only leave the verandah after the post-man has come and gone.

On hot days, ‘Poe-cy’ would stop by and ask for a long tall cool glass of ice water. He never fails to reminder her to put a little coloring inside. Rumour has it that Matilda and Poe-cy are having an affair, but no one dare suggest that to her face. Poe-cy and Matilda would talk for a good length of time before he would mount off on his route, ringing the bicycle bell at each gate as he delivers the mails.

Now in the ceiling of the veranda and just over the bedroom door, the croaking of a lizard draws Matilda’s attention. It frightened the living hell out of her and she is much afraid of lizards and bullfrogs.

Scolding the chameleon in a stern but panicky voice Matilda said, “Mi and yu not sleeping in yah today a bax-side.  Y’u ha khum out by the hook or by the crook. Is wa dis pon mi poor ole widow though Poopa Gezas?” Hurriedly she makes her way back to the kitchen, returning moments later with salt to throw at it, but by then, the lizard was either long gone or has disguised itself.