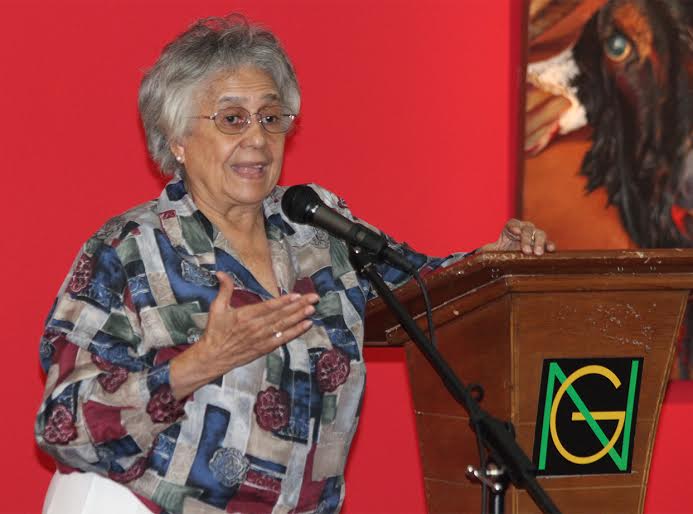 The winners of the inaugural Lignum Vitae Writing Awards were revealed at a literati studded awards event on Friday November 6, at the National Gallery of Jamaica. The highly anticipated event was presented by the Jamaican Writers Society (JaWS) in partnership with the Jamaican Copyright and Licensing Agency (JAMCOPY). The Lignum Vitae Writing Awards whose mandate is to further stimulate and develop Jamaica’s literary landscape through the promotion and celebration of new Jamaican writing seem poised to do just that.

From a grand total of forty three (43) entries across three categories, nine remarkable entries comprised the short list which led to the final reveal of the three big winners. Janet Morrison’s short story collection, A Different Me: A Better You, took top prize of $250,000 for the Jean D’Costa Award for children’s literature while Diana McCaulay’s Gone to Drift copped the Vic Reid Award for young adult literature which also came with a purse of $250,000; the third category, the Una Marson Award for adult Literature and prize of $500,000 went to Donna Hemans for her novel Tea By The Sea.

Jean D’Costa, the only living literary icon for which the awards are named was on hand to deliver the main address and cited the awards as a delightful motivation for new and established writers to continue to strive for excellence and authenticity in telling their stories.

Mrs. Dianne Daley-McClure, Acting Chairman of JAMCOPY underscored the agency’s commitment to the country’s development and remarked that every shortlisted entrant was indeed already a winner, and praised them for their effort.

During her welcome address, Ms Tanya Batson- Savage, President of the JaWS and Chair of the Lignum Vitae Writing Awards pointed out that the business of writing, though challenging, is essential to developing Jamaica’s cultural and literary capital. Ms Batson-Savage said the awards arose from the serendipitous mutual desire for a significant writing award by JAMCOPY and JaWS. She praised the copyright agency for taking the initiative to establish a cultural fund for the promotion of the industry that helps to sustain it as well as the additional sponsors, the Jamaica Broadcasting Commission, The HEART Trust-Nta, Nucleus Creative, The Tourism Enhancement Fund, Scarlette Beharie, the National Gallery of Jamaica and a Likkle Slice of Heaven.

Ms Batson-Savage was also fulsome in her thanks to the judges who invested many hours into the adjudication process and took great pains to present not only the final winners but a very impressive shortlist. The full shortlist of nine finalists included Paula Lennon for the Titichfield Turnabout (Vic Reid), Helen Williams’ Duppy in the Wardrobe (Jean D’Costa) and for the Una Marson Award: Patrick Brown’s The Cherry Picker, Garfield Ellis’ The Angel’s Share, Sylvia Gilfilian’s The Road to Timnath and Kei Miller’s Augustown

Ably guided by compere Dahlia Harris, the awards programme was a sleekly crafted literary experience against a backdrop of arresting pieces from the Young Talent exhibition now on at the National Gallery. Topped and tailed by the musical jugglings of DJ Iset Sankofa, while Tribe Sankofa provided stirring readings of excerpts of the winning entries as well as a tribute to Jamaican author Anthony Winkler.

The Lignum Vitae Writing Awards will be presented biennially with the next cycle scheduled for 2017.

Iconic Jamaica Children Author after whom the Jean D’Costa Award for Children Literature is named was the guest speaker at the recently concluded Inaugural Lignum Vitae Writing Awards held at the National Gallery of Jamaica on Friday, November 6, 2015. Mrs D’Costa who is also a linguist and Professor Emeritus, is the author of the seminal Jamaican books Escape to Last Man Peak and Sprat Morrison. 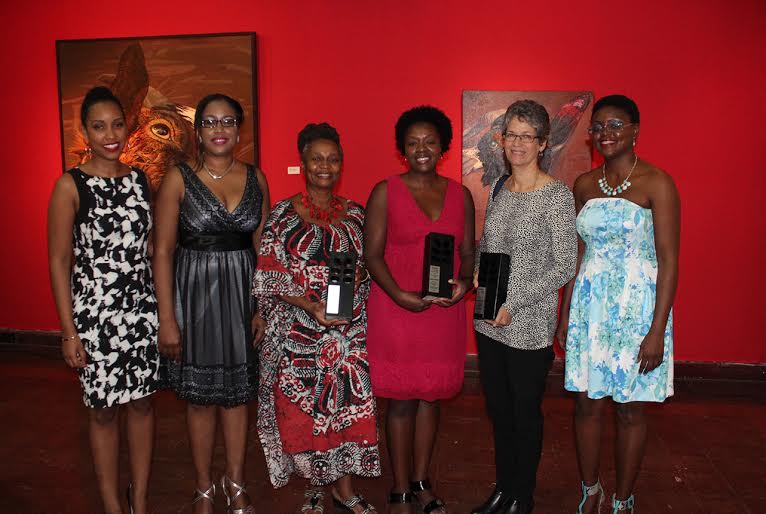 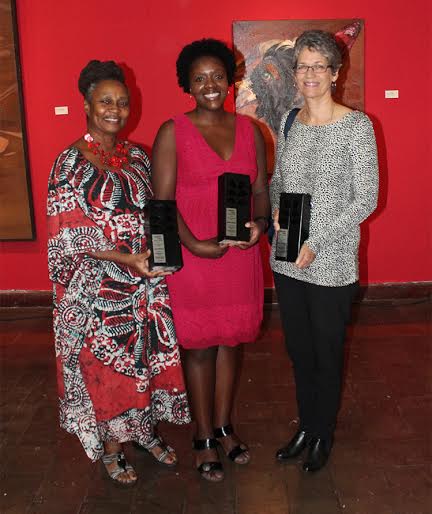 The winners of the inaugural Lignum Vitae Writing Awards proudly display their trophies at the conclusion of the award ceremony at the National Gallery of Jamaica on Friday November 6. They are (L-R). Janet Morrison whose short story collection “A Different You: A Better Me took top prize for the Jean D’Costa Award for Children Literature, Donna Hemans’ novel Tea by the Sea took the Una Marson Award for Adult Literature while Diana McCaulay won the Vic Reid Award for Young Adult Literature with her novel Gone to Drift. The Lignum Vitae Writing Awards are presented biennially by the Jamaican Writers Society (JaWS) in partnership with the Jamaica Copyright Licensing Agency (JAMCOPY)