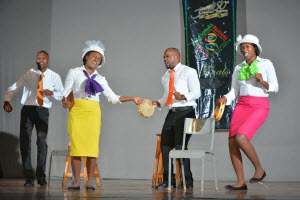 The Little Theatre in Kingston will come alive on Tuesday, April 14 when the Jamaica Cultural Development Commission (JCDC) kick-starts the National Finals of the Annual Festival of the Performing Arts. The anticipated Festival will run until Thursday, May 14, 2015 at the Little Theatre, 20 Tom Redcam Drive, Kingston 5 beginning 10:00 a.m. daily with tickets being sold at a cost of Adults $400, Children $200 and Students with ID $200.

The Festival promised to an exciting and entertaining one with the most outstanding items from each parish will compete for national supremacy  in the areas of Music, April 14- April 16; Traditional Folk Forms, April 21-23;  Speech, April 28-30; Dance, May 5-7 & 14; Drama, May 11-12.  There will be two special days, Drum Fest on Friday, April 17 at the Louise Bennett Garden Theatre, starting at 3 p.m. Drum Fes features the most outstanding drummers from across the island. On Wednesday, May 13, the Little Theatre will feature performances from the deaf community with the Deaf Dance Festival starting at 4 p.m.

JCDC Director of Marketing and Public Relations, Stephen Davidson notes that the JCDC stages the Festival of the Performing Arts annually to unearth, develop, showcase, preserve and promote the creative talents and expressions of the Jamaican people.

“Jamaica is well known for its creativity and talent in areas of music, dance, speech and drama and the Festival of the Performing Arts provides an excellent avenue for participants to showcase their talents and for patrons to enjoy wholesome family entertainment” Mr. Davidson added.
The competitions in the Performing Arts are opened to persons residing in Jamaica which includes schools, community groups, youth clubs, social clubs, Performing Arts clubs, churches as well as outstanding individual performers. Participants are engaged in a number of workshops throughout the year before competing at the zone, parish and national levels in order to improve the quality of their performances.