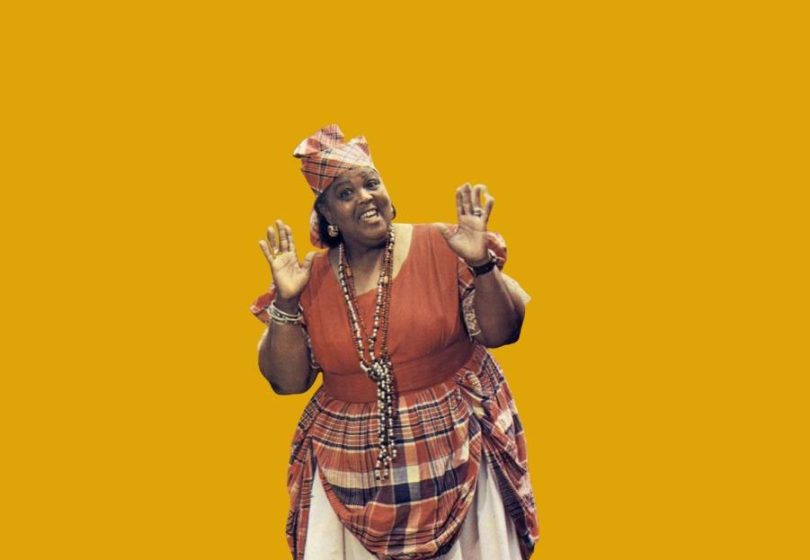 Poet, folklorist, educator, performer, and activist Louise Bennett-Coverley, better known as Miss Lou, was born in 1919 in Kingston, Jamaica. She attended Ebenezer and Calabar elementary schools, St. Simon’s College, and Excelsior College, and enrolled at Friends College in 1943 to study Jamaican folklore. She first came to public attention in 1943 when she published a poetry column in the Sunday Gleaner newspaper. She also became known as a judge of drama shows on the island and as a performer. She wrote and performed her poems in Jamaica Patois and was influential in getting the language accepted by mainstream art interests. She was the first Black student to study at the Royal Academy of Dramatic Art (RADA) in London, which she attended after receiving a scholarship from the British Council. After RADA, she worked with various repertory companies throughout the UK and hosted two programs on BBC Radio. In 1954, she married Eric Winston Coverley, a performer and promoter of Jamaican theater. She worked for the Jamaica Social Welfare Commission from 1955 to 1959 and taught folklore and drama at the University of the West Indies. She produced radio monologues and hosted a children’s program on television until 1982. Bennett Coverley appeared on Jamaican television and traveled widely to promote Jamaican culture and language. She wrote several books in Jamaican patois, released recordings of Jamaican folk music, and is said to have given singer Harry Belafonte the basis for his popular “Banana Boat Song.” Miss Lou was made a Member of the Most Excellent Order of the British Empire in 1960 and the Order of Jamaica in 1974 and received honorary doctorates from the University of the West Indies in 1983 and York University in Canada in 1998. She died in Toronto, Canada in 2006. She received many awards and honors for her work in Jamaican literature and theater, including the Norman Manley Award for Excellence, Order of Jamaica, Musgrave Medal, and the Jamaican Order of Merit.