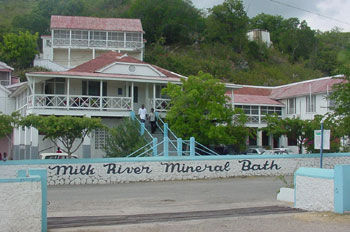 The Milk River baths in Jamaica is said to have one of the highest radioactivity levels of any mineral bath in the world. Analysis of the mineral spring shows it is more radioactive than the leading European spas, Baden in Switzerland and Karlsbad in Austria. The bath is reknowned for curing many ailments including – Sciatia, Lumbago, Gout and Liver disorders.

The orgins of the bath is very interesting, rooted in Jamaica’s slave history. The story begins with a slave owned by a man named Jonathan Ludford. He was beaten by his master and ran away into the forest .The slave came upon the Milk River Bath and washed his wounds. The bath soothed his wounds and they began to heal. Upon returning to the slave village his slave master agreed not punish him if he told him the location of the spring. The area was then fenced off and this slave was given the duty to guard it. The property that the springs were on, were later willed to the goverment. They built the first bath on the property in 1794 and opened it to public that year. Currently there are 9 baths and a hotel on the property. Today the Milk River Bath is visited by locals and patrons from all over the world for its renowned healing power.

Location: Clarendon
Hours of Operation: The baths are open 24 hours a day to hotel guests and 7am to 9pm to the public. There is also a public mineral water swimming pool that is open on weekends.