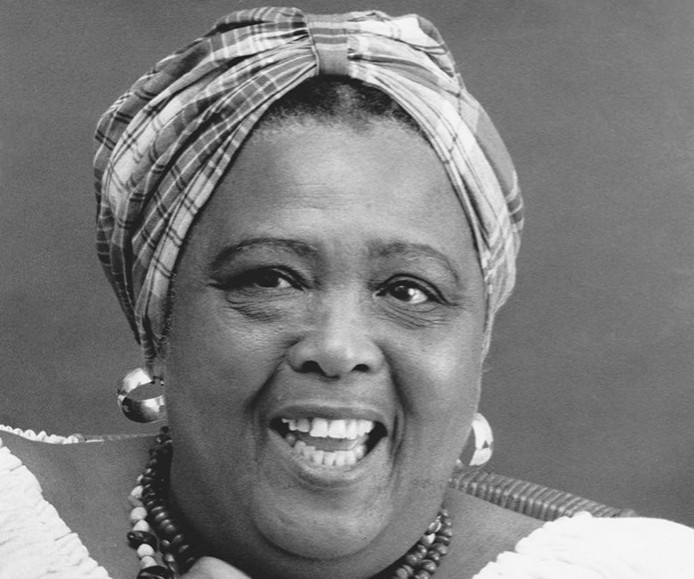 Miss Lou, the Honourable Louise Bennett-Coverley O.M., O.J., finally has her day! September 7 has officially been declared, by Governor-General Sir Howard Cooke, to be ‘Miss Lou Day’. The day marks the works of the esteemed first lady of comedy in promoting, celebrating, and exploring Jamaican culture. It also marks the day of her birth.

Born in 1919 in Kingston, Jamaica, to a widowed dressmaker, Miss Lou’s artistic learnings, creativity, and love for performance were nurtured by her mother and grandmother. Miss Lou recalls that as early as age seven, she delighted in telling stories and performing for playmates and family members. Clap yuhself, Miss Lou!

We here at Jamaicans.com have declared May 2003 as Miss Lou Month.

Jamaicans.com will continue to root for Miss Lou in becoming our next National Heroine.

Louise Bennett, Caribbean cultural icon, linguist and poet, has been writing and performing using the Jamaican Creole since the 1950s. For a long time, despite the fact that her work gained limited favour among the working class and some intellectuals, her writings did not appear in the important Jamaican anthology Focus in the 1940s to the 1960s, and the Jamaica Poetry League ignored her. In 1962, she was included in the Independence Anthology of Jamaican Literature, but not in the section for poetry. It took the social and political upheaval of the 1970s for academics and others to accept Louise Bennett as a guru of the Jamaican Creole. She received the Order of Jamaica in 1974.

Louise Bennett had a programme called “Miss Lou’s Views” on Jamaican JBC Radio in the 1970s. One correspondent wrote in a daily newspaper that such a programme should be scrapped because it tended to perpetuate ignorance in Jamaicans. Though Louise Bennett has sought to foster love and respect for the Jamaican dialect, she has never advocated that Standard English be abandoned. She argued that for far too long it was considered not respectable to use the dialect, because there was a social stigma attached to the kind of person who used it. She added that many people still did not accept that for many Caribbean people, there were many things best said in the language of the folk. (“Bennett on Bennett” 101).

The debate as to the rightful place that Caribbean dialects should play in the life of the people is ongoing and contentious. Many people mostly the middle-class, seem unable to accept the proposition that Caribbean people may be armed with both Standard English and the Creole.

Marcia: Our dear Miss Lou, please accept our sympathies here at Jamaicans.com on the passing of Mr. Eric Coverley.

Marcia: Jamaica Labrish has been your most requested book to date. Are there any other books published by you? People are always asking about where to buy tapes/cds with your work, where would you direct them to start looking for your works?

Miss Lou: Yes there are other books currently in print – Selected Poems, Aunty Roachy Seh, Anancy and Ms. Lou. Books out of print – Songs from Pantomine published in 1949, Laugh with Louise 1962, Editor for Jamaican Mother Goose, and others published by Pioneer Press which was owned by The Gleaner Company. Sangsters Book Store is the publisher, and carries the books.

Marcia: Most of us grow up seeing you on Ring Ding on JBC, are there any tapings of this programme available for purchasing?

Miss Lou: To my understanding when I asked about it, the tapes were scrubbed and recorded over with other programs. None to my knowledge were preserved, so there are none available for sale.

Marcia: We are indebted to you for bringing pride to the Jamaican Patois and giving it international recognition. Who in your estimation does a great imitation of you? Is this person one of your protégés?

Miss Lou: Without hesitation I will say Faith D’Aguilar. She has me down pat . She once fooled my late husband when he heard her voice over a loud speaker, and thought I had returned from a performance overseas without telling him. I could not say she was my protégé.

Marcia: Let us play “What If”…What if you were asked to rewrite the National Anthem of Jamaica, what would you do differently to the words?

Miss Lou: Nothing, they are just fine.

Marcia: What does it mean when you say, “Jack Mandora mi nuh choose none” at the end of one of your stories?

Marcia: How did you and the late Mr. Ranny Williams start out on radio? Are any of those programmes available for sale?

Miss Lou: The Lou and Ranny Show was the first radio sit-com and was the show that opened JBC when it started. We were approached by the Matalons to do a comedy programme for JBC radio. Ranny was an outstanding comedian.

Miss Lou: I did about twenty-five, starting in 1943. I have lost count. Ranny and Lee Gordon (Amos and Andy) appeared as comic relief, front of curtain in Jack and the Bean Stalk 1941 and Babes in the Woods 1942 and the third Pantomine written by Vera Bell a dramatization from Soliday and the Wicked Bird 1943, and it was the first one that was really Jamaican. Ranny’s first leading role was “ Anancy “ in Busha Bluebeard in 1949

Marcia: As our First Lady of Comedy, are there any comedians that you get a good laugh from?

Miss Lou: Nuff, Nuff too many to mention.

Marcia: Who are some of the people who influenced you?

Miss Lou: Too many to mention but two are Philip Sherlock – Former Head master of Wolmers Boys School, vice chancellor of the UWI, and one of the founding fathers of UWI. He published a book on Anancy and was very interested in Folklore and was the head of Extra Mural Studies at the University of The West Indies. An outstanding man in the field of Education. A great Jamaican. Also Ashley Clark – musician, he started the idea of Christmas Morning concerts in his music store on King Street. He was always interested in my writings and cultural activities and we were working together to produce a dictionary of Jamaican Folk Speech. I have no idea what happened to the manuscript

Marcia: Do you have an official website? Do you think the Internet is a helpful tool to showcase your work to the younger generation?

Miss Lou: Yes, I do it is currently under construction but it has a few current photos. The address is www.louisebennett.com. When it is finished it will have my biography, general information and some of my works.

Marcia: What is your philosophy? Do you have a favourite quote?

Miss Lou: “Treat all with respect”

Teck kin-teet kibba heart bun – Use a smile to disguise your sorrow.

Dark night got peeny-wally – Behind every dark cloud is a silver lining.

Marcia: Thank you from all of us here at Jamaicans.com for being the only poet to really tell the truth about our society in Jamaica through our own language. Walk good Miss Lou, and may good duppy always walk with you. Walk good.