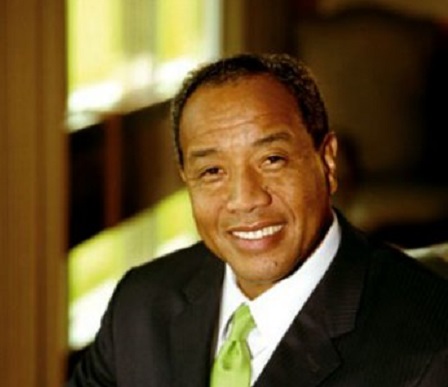 The Michael Lee-Chin Crystal glowed against Toronto’s night sky. Tens of thousands of spectators crammed the city streets for the opening of this revolutionary addition to the Royal Ontario Museum. The man of the moment spoke from the giant outdoor stage: “Two nights ago I stood in this place with my mother, Hyacinth Gloria Chen, for the very first time. And it was my mother who said, “What’s a little orphan girl from Jamaica doing here?”

To sustained applause, the billionaire philanthropist affirmed, “There is no poverty that cannot be overcome except that of an impoverished spirit.”

Lee-Chin credits his mother for lighting the fire of ambition in him, and hugged her tightly with tears in his eyes after none other than Canadian Governor General Michaëlle Jean declared the building open two Saturdays ago, with a graceful flourish of the hand, exclaiming, “Magnifique!”

Magnifique, indeed, the magnanimity of this immigrant-turned-billionaire, the lead donor for the 175,000 square-foot Crystal which houses five galleries and the Hyacinth Gloria Chen Crystal Court, named for the lady whose unfailing courage inspired him to dream big dreams.

There are many stirring episodes in the life of this man who is determined to help restore peace and build prosperity in his homeland, Jamaica. Last year, Lee-Chin was driving through his beloved Port Antonio when he saw a group of men standing along the path leading down to the sparkling Blue Lagoon, a recent acquisition.

After greeting them, he asked, “How would you like to be able to send your children to university?” They were immediately interested. Then he asked, “Who is the leader here?” They pointed out “King Sabba”.

“King Sabba,” said Michael. “I want you and your friends to take charge of clearing out this area. Go to the hardware store, and ask them to give you brush-cutters, rakes, wheelbarrows on my account. Then I want you to start working right away. I’ll come by every couple of weeks to see how you’re doing.” The men have been doing well, obviously charged with a vision of that glorious graduation day.

Michael knows this is no pipe dream. A few decades before, he was the youngster pushing a wheelbarrow on the grounds of Frenchman’s Cove, grateful for a summer job at the posh hotel where his mother worked as a bookkeeper for Granger Weston (thereby hangs a tale – you will see further on).

In an earlier column entitled “If Shearer had denied Lee-Chin”, I described young Michael’s determination to complete his college education even after he had run out of money. He used his last few dollars to return to Jamaica from McMaster University in Canada, and pleaded his case with the late Prime Minister Hugh Shearer. He graduated, returned to fulfil his bond, joining the engineering team at Jamaica’s Ministry of Works to build the Mandela Highway.

The threads of this special life have been woven into an intriguing tapestry. Michael Lee-Chin has met with Mandela for an outreach project in South Africa. Then in 2002, he opened Forbes magazine and saw his picture beside that of Granger Weston’s brother Galen and his wife Hilary: Lee-Chin had made the famous Forbes’ billionaire list.

“I thought to myself – this must mean something,” said Michael at a press preview of the Crystal. “There it was – my photograph side by side with the Westons.” As reported in the New York Times, when approached by Mrs Weston to be the lead donor of Can$30 million for the ROM, Michael remarked that she could have simply asked her husband at the breakfast table to write the cheque. She countered, “If you write the cheque, it would be an inspiration to every single immigrant.” That resonated with Lee-Chin and indeed, Mrs Weston was right.

The pride among immigrants was obvious a few days ago when a group of media representatives from Jamaica attended the two-day celebrations marking the opening of the Crystal.

Journalist Barbara Ellington (a childhood friend of Lee-Chin’s family) asked a Korean photo shop owner if he could email photos for her and explained that she was in Toronto to cover the opening of the Michael Lee-Chin Crystal. “I don’t do emails,” said the man, “but I will do it for Lee-Chin.”

A couple of months ago, Michael heard that there was an artist’s studio in the old Port Antonio railway station. The next day he was there, buying pieces from the talented painters.

I was relating this and the Blue Lagoon episodes to AIC vice-president Robert Almeida who offered insightful analysis.
“Mike demonstrated the key principles of getting things done,” he said. “He shared a vision, identified a leader and then he made sure that they had the right tools.” Robert said that Mike also checks the progress of their work in the belief that “if practice makes perfect, then excellence should be a habit”.

He described Michael’s support of the Port Antonio artists as “the power of encouragement”. Almeida said that in embracing Portland Holdings’ philosophy of “doing well and doing good, we are uniting the desire to achieve with the desire to serve”.

To date Lee-Chin’s multimillion-dollar investments have spanned almost every aspect of business, employing thousands and funding community outreach programmes, also to the tune of millions. Matching his successes abroad, his daring investment in National Commercial Bank five years ago has seen unprecedented profits.

When PIOJ Executive Director Dr Wesley Hughes announced last week that 2006 had seen the lowest level of migration from Jamaica since 1953, I reflected on Lee-Chin’s remark that we in the Caribbean “have acres of diamonds in our own backyards”. Thanks to his patriotism and perseverance, we may finally be discovering them.