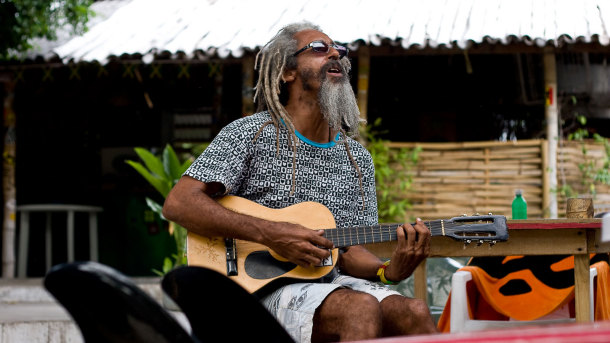 This week we have a conversation with Billy “Mystic” Wilmot from the reggae band, Mystic Revealers.  After 15-year hiatus the dub rockers band  recently reunited to release a new album titled, “Crucial Cuts”, on the VP Records Label. The first single from the album titled  “Herb Must Legalize Now” features international reggae star Chronixx and was released in February.  Here is our conversation with band leader, Billy “Mystic” Wilmot , who is also a surf legend in Jamaica.

Tell us about your background and how you all got started?
Billy – The group “Revealers” started in the late 70’s in the coastal community of Eight Miles, Bull Bay in east rural Saint Andrew. Youngsters learning to play instruments as we wrote songs and practiced them… Went to numerous auditions without success… then decided to produce our own material. Hired professional musicians, produced and released “Winner” on our own “Negus Beat” label. Formed the band and assumed What is your favorite and/or most memorable song on the Crucial Cuts album?
Billy – Space and Time.

Tell us about your song “Herb Must Legalize Now” feat. Chronixx. What was your inspiration to write the song?
Billy – For generations marijuana has been used without discrimination and then suddenly because of legislation many innocent persons have become criminals, prosecuted and convicted, their families dislocated, their children affected, their future blighted… all for a simple plant that grows from a tiny seed! What more inspiration could I want? How do you feel about the current cannabis laws that passed in Jamaica?
Billy – It’s a starting point but Marijuana should just be treated like alcohol. 18 years or older to smoke legally, growers need permit to plant based on acreage, Wholesalers need licences to transport based on how many lbs they deal. Retailers require permit to sell and consumers pay consumption tax. Government would gain revenue at every point and production/industry would be encouraged and the taxpayer would be relieved of the burden of carrying the cost for incarceration of the convicted offenders… a win win situation.

You have worked with quite a few artists. What are some of your most memorable collaborations with other artists?
Billy – My most memorable moments with other artists have been during live performances. Sharing the stage with artists who you admire and respect is the best musical experience for me. Just to perform before an artist like Burning Spear and receiving a rousing encore which earned words of commendation from the Spear was definitely one of the bigger highlights for me.

What is Jamnesia and why does it play such an integral part in the current music scene?
Billy – Artists just starting out in their musical careers find it almost impossible to find anywhere to perform. Live show promoters want acts that can draw patrons to the show and if you are unknown you have no drawing power. If the artist is fortunate enough to produce a popular song, and in so doing establish drawing power, a promoter of a big show may call to book the artist and suddenly they are facing their first live performance without any experience even though they have a hit single. Audience expectations are high and the artist may not give an impressive performance due to the lack of experience resulting in a setback to an otherwise promising career. Jamnesia is a space we have created with PA, a drum set for young upcoming talent can work with a live band on a stage and present their material to a live audience and gather “on stage” time, develop their “stage craft” and build a fan base. This has worked for most of the now “Front Running” reggae acts coming out of Jamaica at this time. They are the ones who have benefited and it is they who have declared that Jamnesia has played an integral part in the development of their careers.

What is something about Jamnesia that no one may know yet?
Billy – We have no secrets but we do have plans to be able to help push young talent and provide opportunities for things like live radio show performances and links to record distribution deals.

What projects are you working on right now?
Billy – I have written a lot of new material over the past few years that will form the body of works to be considered for our next album. We have been rehearsing and rehearsing for touring and, for recording the new album, which will be the first new one since “This One’s For Jah”.

What is your proudest moment so far in your career?
Billy – Pride cometh before a fall…. I prefer to say “Joyous”! Life is existence in a continuous moment. All emotions are common to all ones. I have had joyous moments on many occasions and in those moments it was the most joyous feeling… too many to single one out!