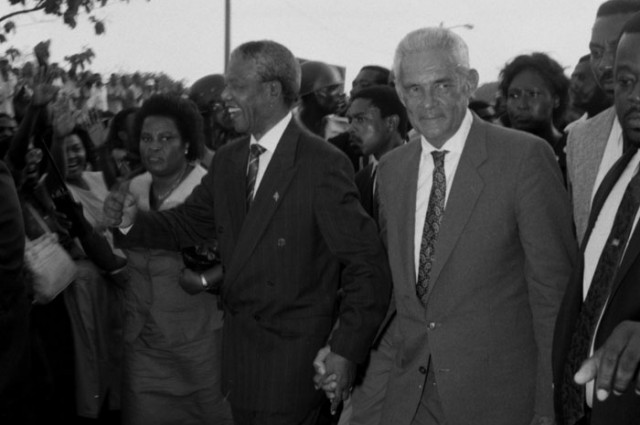 On July 24, 1991, Nelson Mandela and his wife Winnie Mandela visited Jamaica. Mandela was the president of South Africa, one of the most respected statesmen in the world, a life-long opponent of apartheid and a strong defender of democracy and justice for all people. He was welcomed by large crowds that flooded Kingston’s streets just to get a glimpse of him. Many waited for hours as he had lunch in Vale Royale, and thousands waited for him to arrive at National Stadium.

A special reception for Mandela moderated by Jamaica’s Minister of Labor, Welfare and Sports Portia Simpson Miller, was held at the Oceana Hotel ballroom, which saw an strong expression of emotion that began with the poem “Bedspread” delivered by the writer Lorna Goodison, and ended with many Jamaicans trying to give Mandela gifts and crafts they had made in his honor. Mandela used this occasion to highlight the need to undo the damage done by apartheid to South Africa by keeping the country out of international sports competitions until all of its citizens, regardless of their ethnicity, were given the same opportunities to achieve their full potential.

Rolihlahla “Nelson” Mandela was born on July 18, 1918, in Mvezo, a village near Mthatha in the Transkei region of South Africa. His name “Rolihlahla” literally means “pulling the branch of a tree”. His father was the principal councilor to the Acting Paramount Chief of the Thembu. After he died in 1927, the young Mandela became the ward of the Paramount Chief Jongintaba Dalindyebo, to be prepared to take on a high office. During his formative years, he heard stories of his ancestors’ bravery during wars of resistance and dream of making his own contributions to his people’s struggle for freedom.

Mandela spent his life struggling against apartheid in South Africa, which was a legalized system of racial discrimination introduced by the National Party in 1948. The government segregated education, medical care, public services, public access, and other services by race, with black people receiving inferior services to those given whites. The injustices of this system prompted Mandela to act: his first act of defiance was the Campaign for the Defiance of Unjust Laws in 1962.

He organized a mass civil disobedience campaign against apartheid. He and 19 others were arrested, and he was convicted at trial of contravening the Suppression of Communism Act. His prison sentence was suspended but he was prohibited from attending rallies and could not travel beyond Johannesburg city limits for six months. He was arrested again in 1962 for traveling out of South Africa under a false name and sentenced to five years in prison. While serving his time he was sentenced on other charges, including 221 acts of sabotage meant to overthrow the apartheid system. His trial for these alleged crimes became known as the Rivonia Trail, named after a safe house on a farm in Rivonia used by ANC members. Mandela was convicted at this trial and sentenced to life in prison.

He was released in 1990, however, and continued to fight against apartheid, and in 1993, he received the Nobel Peace Prize jointly with F.W. de Klerk, then president of South Africa, for their work toward dismantling the apartheid system. The efforts of the two men led to the first democratically held elections in the country and to the election of South Africa’s first black president, Nelson Mandela.

Mandela continued his efforts as an advocate for social causes after leaving the presidency. He continued to work against racial and social injustice, the abuse of women and children, and in support of aid for causes including HIV/AIDS, poverty, disaster relief, education, preservation of the family, human rights, and hunger. The United Nations officially declared July 18 as “Nelson Mandela International Day” in 2009, The day formally launched in 2011 to honor his life’s work. In 2012, Prime Minister, Portia Simpson Miller launched the Nelson Mandela International Day in Jamaica.