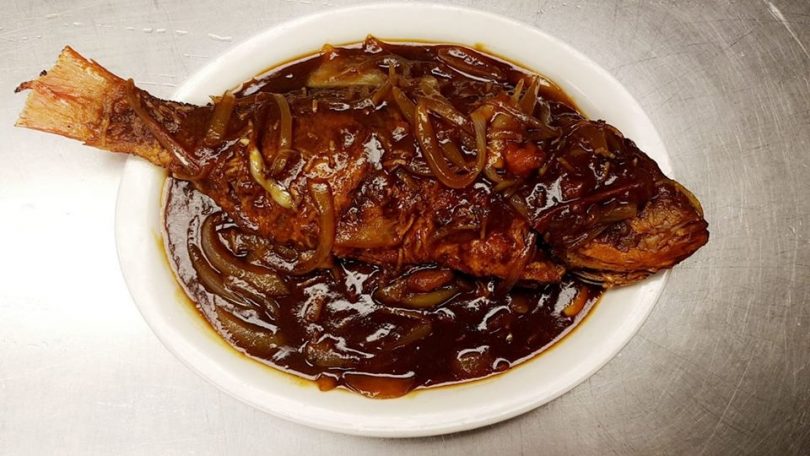 Jamaican Anthony Ewen and his son Rashid Whyte opened their new restaurant Real Jamaican Restaurant and Jerk Center in Rocky Mount, North Carolina, at the end of May 2018. Featured on the menu is authentic Jamaican cuisine such as oxtail, jerk chicken, brew stew chicken, curry chicken, roast pork, curry goat,  stew fish, steamed fish, and ackee and saltfish. Also on offer is Jamaican rice and peas and Jamaican patties. The restaurant provides a special seafood theme on weekends that features escovitch fish, brown stew fish, peppered shrimp, curry shrimp, lobster and other seafood delicacies. Ewen says the kitchen is operated by two established Jamaican chefs, one from New York and one from Charlotte. Ewen added that he didn’t want to “Americanize” the food,but wanted to feed everyone in “the Jamaican way.” This is the second Jamaican restaurant owned by Ewen, who still owns a restaurant in Jamaica that he launched in 1989. In addition to owning the restaurant, Ewen worked as a pharmacist in Jamaica. Ewen moved with his family from Jamaica to Rocky Mount in January 2018 when his wife was hired as a nurse at Nash UNC Health Care. Ewen selected the location for his restaurant after talking with John Jesso, Downtown Development Manager, who convinced him that it was the right move. Jesso said he was excited to have the new restaurant open in this location, believing it adds to the diversity of dining choices in the growing downtown scene. Diners are providing positive reviews, with comments including, “The service and food were both 10 STAR! True authentic Jamaican food!! Our waitress was really nice. This is going to be a hot spot!” And “A friend and I ate there last weekend. Our experience was great; we would definitely go back. Our waitress was very attentive and personable.The atmosphere was very pleasant, relaxing, and conducive to good conversation.” Another customer used the restaurant to cater an event for 30 people and said, “”We used the Real Jamaican Restaurant to cater our event, and they were incredibly professional, and the food was absolutely delicious!”