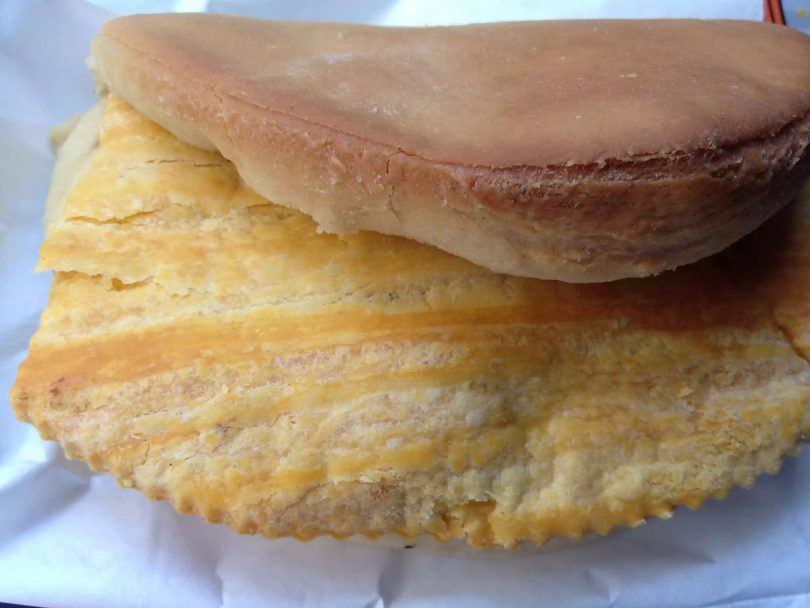 In a feature article last month, the New York Times newspaper has recognized the widening exposure of Americans to the Jamaican beef patty. The patty, with its flaky crust and spicy filling of ground beef, Scotch bonnet pepper, onions and garlic, has moved beyond Jamaican bakeries and into major retail outlets like Walmart. In New York City, the school system served over three million Jamaican patties in fiscal 2016. Even in Lawrence, Kansas, Mike Logan’s Lucia Beer Garden & Grill features the Jamaican beef patty, which is especially popular with college students there. Some fans cite its convenient portability for its popularity: diners can hold it in one hand, and on Saturday nights in Lawrence, customers can buy the patties through a walk-up window. Logan is from Lawrence and was introduced to Caribbean foods by George Ricketts of G’s Jamaican Quisine in Kansas City, Missouri.

Jamaica’s Lowell Hawthorne has been instrumental in introducing Caribbean food to Americans since 1989 when he took a gamble and opened a bakery in the Bronx. That bakery grew to become the Golden Krust Caribbean Bakery & Grill, and now CEO Lowell oversees 120 restaurants in nine states with more to come in the summer of 2017. While the food chain’s menu offers other Jamaican dining choices, its biggest sellers are beef patties. A decade ago, Golden Krust produced some 30 million patties a year; now it is providing over 50 million patties per year to about 20,000 retail outlets in the US. As Hawthorne told The Times, “We believe in the power of the patty.”

Jamaican beef patties are also available in Durham, North Carolina, at Devil’s Pizzeria & Restaurant, where Ziad Lobbad sells about 150 patties every day to people who ask for the addition of mozzarella and pepperoni as toppings to their patties.

If Zoe Bruce, who was raised in Manchester, had not opened a grocery shop in Kingston and turned her skill in baking into a thriving business selling patties over the counter, the world might never have heard of the Jamaican treat. She opened Bruce’s Patties near downtown Kingston in the 1930s. People would gather at the restaurant after work, and soon it had the reputation of serving the best beef patties in the country, said her grandnephew Jimmy Bruce, The restaurant was the trailblazer, he continued, but after some time, large competitors like Tastee and Juici Patties entered the market and made production more industrialized. About 2,000 patties could be made by hand in a day at Bruce’s, but a machine produced 2,000 in an hour. Unable to compete, Bruce’s closed in 1992.

In the 1970a, almost 257,000 Jamaicans left the island to avoid a period of upheaval and violence, Basil K. Bryan told The Times. Bryan, the former Jamaican consul general to New York, noted that these immigrants had more money and resources than earlier immigrants, and they created a market for island comfort foods. Trade between the US and Jamaica increased largely supported by this population, which wanted jerk seasonings and spices from their home.

Among this group of immigrants was Richard Hammond, whose family arrived in the US in 1979. His father purchased a Caribbean bakery in Miami Gardens, Florida. When it opened, the bakery was the only patty shop in the area. Now Hammond’s Bakery has two shops, both of which offer patties made by hand according to his father’s recipe. Current customers of Hammond’s are usually first- and second-generation Jamaicans looking for that homemade patty taste.