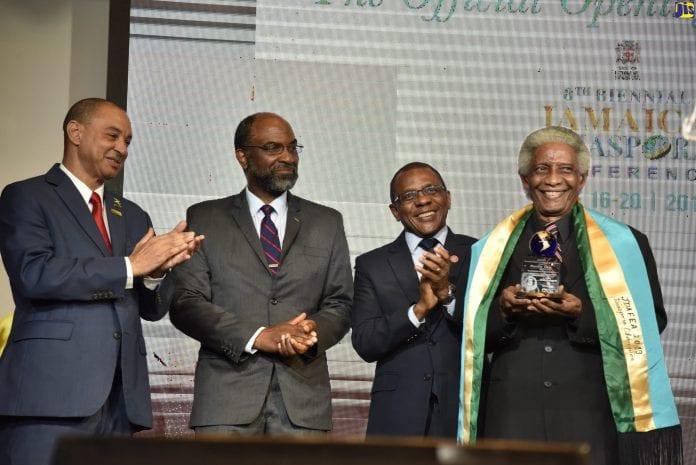 The award was first launched in 2017 at the 7th Biennial Diaspora conference. The awards were created to recognize individuals, organizations, and friends of Jamaica in the Diaspora.  Especially individuals who make exceptional contributions to the development of Jamaica. Additionally, those in the Diaspora who have delivered proven projects, initiatives, and programs that support the growth of Jamaica’s culture, economy, people, and communities.

The first Jamaica Diaspora Champion was Neville Ying.  He received the award in 2019 at the 8th Biennial Diaspora Conference in Jamaica. Ying was awarded for his contributions to the growth and development of the Jamaica Diaspora movement.

This year the pandemic has created new opportunities. They will expand the delivery and reach of the awards. For the first time and moving forward, the Jamaica Diaspora and Friends Champion Awards will be global, virtual, and completely online with public nominations and public voting. The awards will commence with a virtual awards presentation.

Nominees will be scored based on service, impact, collaboration, innovation, and maturity. Scores will be published and a public Diaspora vote will determine the final awardees. Winners will receive global recognition and a variety of virtual wards.  Including, an addition to the Jamaica Diaspora Wall of Fame and the JDAFCA Winners Circle. All nominees will receive an honorable mention.

JDAFCA Chair and JDTAN Operations Officer, Kimone Gooden, noted that “JDAFCA was created to show the details of the depth and breadth of the contributions of the Jamaica Diaspora and friends of Jamaica. It is a peer recognition that will highlight the many individuals and organizations who are actually delivering service to Jamaica but generally go unrecognized.”

The Jamaica Diaspora and Friends Champion Awards (JDAFCA) is presented by the Jamaica Diaspora Taskforce Action Network (JDTAN).  JDTAN is a network of sectoral focused Taskforces with members across 21 countries. Taskforces have been operating for the past seven years as a collaborative approach to engage and mobilize the Diaspora to join forces and support Jamaica Vision 2030 and UN’s Sustainable Development Goals (SDGs.)

JDTAN Chairman Leo Gilling added, “It’s wonderful to see how this award has developed from the initial design when we launched it in 2017. This is a great mechanism to discover the volume of projects delivered every year in service to Jamaica. JDTAN is especially happy to collaborate on this initiative with three key media partners: Jamaicans.com, South Florida Caribbean News (SFLCN), and Dervan Malcolm of Jamaica Diaspora Live Online. These media partners, in particular, have done an extraordinary job over the years showcasing the various projects to Jamaica and always providing a platform for the Diaspora to spread the word.”

“We are honored to be a part of this event that honors hardworking volunteer members of the Jamaican diaspora community.” said Xavier Murphy, founder of Jamaicans.com “I commend JDTAN for recognizing these unsung heroes in the community who give of time and treasure in service to Jamaica.”

Ian Hamilton, Founder of South Florida Caribbean News said, “we are proud to be one of the media partners of the Jamaica Diaspora and Friends Champion Awards. We look forward to learning about the unsung heroes in the Diaspora. In addition being able to share their stories on our platform.