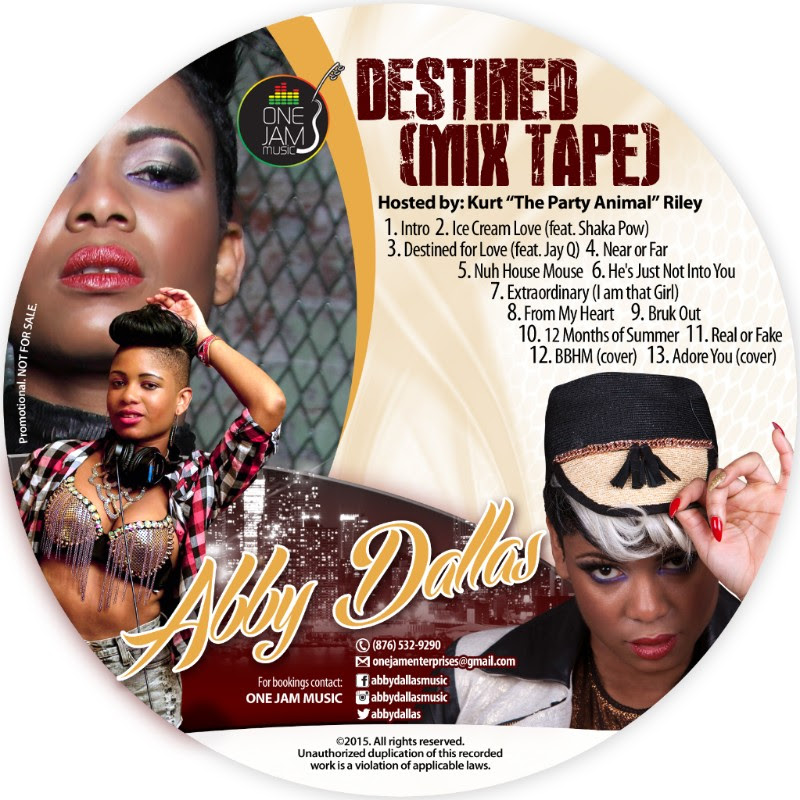 Since the release of her debut EP, Destined, emerging reggae and dancehall star Abby Dallas has put pedal to the metal and has been hard at work promoting her EP with radio and TV interviews, magazine features, and impressive live performances. While Destined, the EP, provides a glimpse of Abby’s vast talent and versatility, the release of her Destined Mixtape, shows why the One Jam Music artiste is most deserving of the moniker, “The Versatile Diva.”

Hosted by internationally renowned DJ Kurt Riley, “The Party Animal”, Destined, the Mixtape, is a musical blend of Lovers Rock, Reggae, Soca, Pop, and Dancehall vibes that showcases Abby’s mesmerizing vocal range and natural comfort in each genre. While the Mixtape, which features 13 tracks, is dominated by popular original material such as He’s Just Not Into You, Nuh House Mouse, and Extraordinary (I am that Girl), Abby also throws in a couple of covers, these include her remake of Ice Cream Love with deejay Shaka Pow, Rihanna’s BBHM, and Miley Cyrus’ Adore You.  Abby’s performance on the cover tracks shows that, based on pure talent, she is a world-class performer.  Indeed, Abby’s refix of BBHM earned her a cover spot on the summer 2015 edition of SYM Magazine and, on more than a couple of occasions, has elicited the remark, “Abby tek di tune from Rihanna.” Similarly, her performance of Adore You, particularly her soaring delivery of the bridge, has left many listeners with goose bumps.

Speaking of the songstress, famed DJ Kurt Riley stated, “Abby Dallas is an artist who has great potential in this business. I’m in love with her vocals. It’s sad to say some female artistes can only sing about what God give dem to hold a man or tek a man from another female. They can’t make other women and people look up to them and into themselves as a person. Abby Dallas is clever enough to do so with her songs that cover a wide array of topics. She has my support.”

While Abby is grateful for the support of the highly respected disc jock, she is also thankful for the support of her peers and her fans.  According to Abby, “I am humbled by the contribution that Romain Virgo, Bugle, Diana King, Ikaya, and Loyal Flames made to the Mixtape. Though the contributions of some of them may not be obvious to listeners, I am nonetheless grateful for their readiness to endorse me as a fellow artiste. Also, as I travel across Jamaica and interact with fans on social media, I am touched by the outpouring of support from my growing fanbase.  Destined, the Mixtape, is a free gift from One Jam Music and me to them in appreciation of their support of Abby Dallas.”

Readers would be wise to heed the words of Bugle, who advises, “Some bwoy a talk bout, dem great? Tell dem fi listen to dis, Destined Mixtape,” and of Romain Virgo, who commands, “Destined, I say, let this music play every day.”