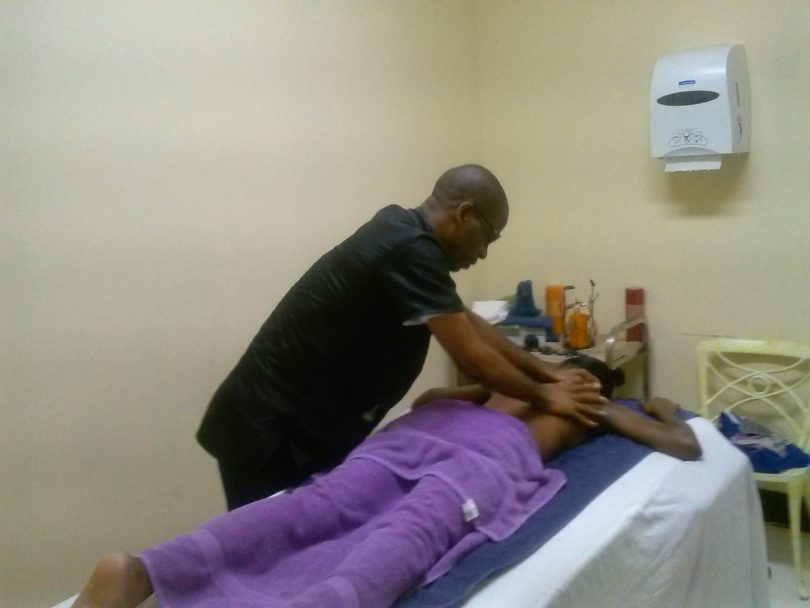 In this installment of Our Stories, blind massage therapist, Audley Jones explains how he found the light a world of darkness and how he overcame the struggles associated with blindness. For many people, Jamaica is pictured as an island paradise – white sandy beaches, a beautiful and vivacious culture, rich and wholesome food, and attractive people. And while that image is not far from the truth, if the lens is focused on the inspirational stories of ordinary Jamaicans, you’d find a sharper, richer and truer image of the Jamaican experience…this is Our Stories! Imagine waking up one day and realising that you are going blind. Losing your ability to see the world in all its colour and glory for a world coloured with one shade.  Audley Jones, who met with blindness in his adult years, took a while to accept this new phase in his life. His lifestyle drastically changed when he was diagnosed with Glaucoma. And with his blindness came the financial, family, career and personal obstacles. Independence now had a new meaning. Nevertheless, he made the decision to live and adapt. Human nature tends to respond to these unwanted happenings with denial and fear as confessed by Audley. He later realized that acceptance was the key to unlocking his full potential and it opened new doors for a brighter future. Through perseverance and determination, he carved a path to success that he can be proud of.

1. How did you become blind?

I wasn’t born blind, I became blind when I was in my 30s. It wasn’t an accident or anything. At one stage in my life, I realised that something was going wrong and I went to check it out. I was told that something was growing in my eye and I needed to do surgery to remove it. However, at the time, I couldn’t do it because I had no money. I continued wearing my glasses. I realized that my state of driving was worsening and I was just not seeing well especially at nights. I was advised to see an eye specialist.

2. How long did you wait before you visited an eye specialist?

I probably waited until about a week or so after the first visit. At that time, they told me about the surgery, which I didn’t do. About a year or so after that visit, I went to another eye specialist who told me it was Glaucoma.

3. After learning you had Glaucoma, how did you feel?

It really took a toll on me. When I asked the doctor what could be done to reverse it he said that nothing could be done. He then asked me if I knew about Glaucoma. I told him no and he sat me down to explain it. Thereafter I started looking into it stage by stage. I think it was about 1997 or 1998 when it happened, you weren’t born as yet (laughs). 4. Take me through the period of you finding out that you had Glaucoma and then actually going completely blind. What was your life like?

After finding out that I had Glaucoma, things started going downhill. I had challenges with my eyes, difficulty working, my friends started moving differently and I started to lose jobs. That was most terrifying for me because when you don’t have a source of income it’s stressful. I am a person that loves to work, make my own money and be my own boss, so it felt like somebody held me and took that from me. I felt robbed.

5. What was your profession at the time? Were you still a massage therapist?

No, I was in the field of construction. I did interior and exterior decoration. I had to be able to climb ladders and stand on scaffolds, it requires sight yuh nuh?

6. You said that your disability affected your job security, what happened at that point?

I still tried to fight and seek other jobs. A lot of times I had to act as if I could see well. I was living in denial. I decided to go out, get jobs and hire other persons to do it, however, these same guys started to expose me. I started telling the employers ‘I am not a 100%(sighted) but I am still capable of doing your job’. That didn’t work well.

7. When did you stop living in denial?

Ok, that’s a very interesting question. One day I was walking on the street, the sun was out, and I made an attempt to cross at a pedestrian crossing. I stepped out on the road and a vehicle ran into me and I couldn’t see anything. I tried to make some excuse and the driver said ‘ok man.’ I tried to go again, and walked into the side of the vehicle, so the man got out and led me across the road. I told him that I was going blind. When that happened, I decided to go home because I had a cane there, but I was so ashamed to use it. I would fold it up and put it at the bottom of a dresser drawer with my clothes. I took out the cane after that and went back on the road. It was very devastating for me, but in the midst, it was like heaven. The cane was reassuring. I also realised that if I used the cane I would still be able to do things for myself.

8. Did you revisit the doctor or did you already have medication?

The doctor gave me some medication but it was very expensive. I was building my house at the time and I had to stop. My kids and their mother live there now because my relationship fell apart. Nobody was accepting me and I could not take the environment anymore. The medication cost about $13,000 and that was about 1998 or 1999. 9. How did you overcome the problems with your family?

To be frank with you, I did not overcome it. My wife at the time said something like ‘yuh blind now, yuh nuh see seh yuh life done?’ At that time, I felt like it would have been better if she took a knife and stabbed my heart. I couldn’t stay there. I try to have a good relationship with my kids, but I believe that there is a picture painted by my wife that I am the worst father.

10. How long did it take you to get used to the new lifestyle brought on by your blindness? Tell me about the changes.

The transition took about a week. When I left my home and came to Kingston, a blind friend of mine took me to Jamaica Society for the Blind. Majority of the persons I met (there) were not born blind. They gave me hope and motivated me. I am now more aware of my environment. I don’t like to have much furniture in my space, especially fragile things that are easy to break. I don’t wear any slippers on the floor at home, that way I can know if there is any dirt or grain on the floor.

11. So how did you get into massage therapy?

Ok, so in 2013, I got this job in Coral Gardens, Montego Bay. It was in the same construction thing. It was like a night job in terms of money, but I bargained for a certain amount. There wasn’t anything written on paper so when it was near finished I went back to the man and asked about getting some more money. He responded by saying that I couldn’t even tell if the job was finished properly so how could I be requesting more money. They gave the job to somebody else after and I just packed my equipment and went away. I came back to Kingston after that and went to Jamaica Society for the Blind. I was told that a lady from HEART Trust/NTA wanted to speak to us blind persons. I went back the next day and after hearing the lady, I (decided that I) wanted to do a level 3 certificate in construction, open an office and have some persons working for me. There was a friend of mine who said to me to do the massage therapy course. I signed up and was called for an interview one year later. By then, I had started walking around selling grater cakes, gizzada, etc.

2014. I came back and did English, Mathematics and Communication tests. I did the orientation and started school the following week. I then got a job with them right at the school because they have a public spa. They sent me to Runaway Bay afterward. Whenever I am in town though, I go to classes because I am doing a level 4 certification in massage therapy. At the end of it, I will get an Associate’s degree.

13. That’s great! What was it like going to HEART while being unemployed?

It was stressful, I didn’t have money and I had to pay my rent, had to eat. I was suffering and not suffering at the same time. I have always said that you are not going to see me as a blind person on a bus singing or at a bus stop begging, there are greater things that I can do. At one point, I had some relatives abroad who use to assist me. When it wasn’t coming forth, I went somewhere and asked someone to do a letter for me targeting corporate society asking for assistance.

14. Are there any other personal and professional goals that you have in mind?

Yes, I have two right now. I want to start my own business. If I don’t get to open my own business, I would really like to explore the international market for blind massage therapists. I would also like to buy a house for myself using the National Housing Trust.

15. Is there any advice that you would like to give to other blind people out there who might come across your story?

Yes. I would like to let blinds persons, and others with disabilities know that this is not the end of the road. Suicide is not an option, hiding away, lying down and locking yourself away is not an option. A friend of mine said to me ‘It better yuh walk for something than sit for nothing’. You don’t have to depend on other people. Someone told me that society owes me nothing even though I have a disability. I need to fight for myself even though at times it might feel like I am going under.

Audley Jones is a massage therapist who is employed by the Heart Trust/NTA. He can be contacted via cell phone at 876-812-2074, Whatsapp 876-898-4678 or by email at [email protected] for private consultations.