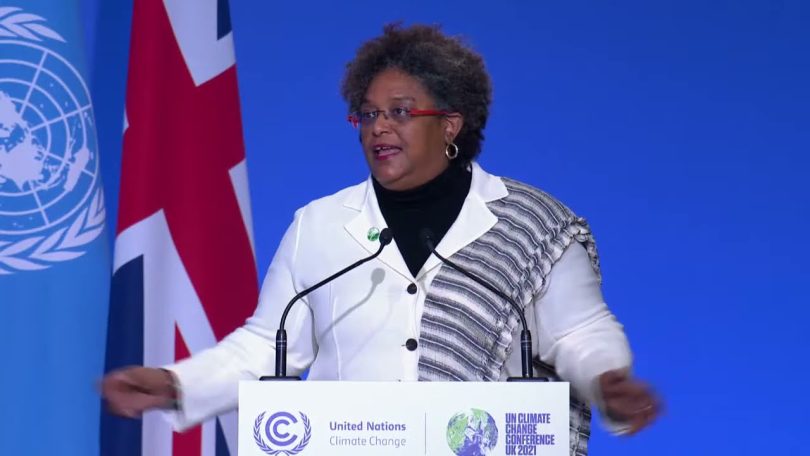 Mia Mottley, the Prime Minister of Barbados who made headlines with her strong presentation to the United Nations in September of 2021, continued to make her mark on the world stage with what has been described as a “fiery speech” on climate change at the COP26 United Nations Climate Change Conference held in Glasgow, Scotland, on November 1, 2021. Mottley represents one of the oldest of Great Britain’s Caribbean colonies, although Barbados will remove Queen Elizabeth II as its head of state on November 30, 2021. In her speech, Mottley said an increase in global temperature of two degrees Celsius would represent a “death sentence” for islands and coastal communities. She exhorted the nations of the world to “try harder” to change the situation and said that failing to provide sufficient funding to small island nations, which are on the frontline of climate change, can be measured in “lives and livelihoods.” She called the lack of support “immoral” and “unjust.” She called on world leaders to spent more on financing a transition to more sustainable sources of energy, energy use, food consumption, and transportation. If this is not done, Mottley said it will “greed and selfishness to sow

The pandemic has taught us that national solutions to global problems do not work.

We come to Glasgow with global ambition to save our people and our planet but now find three gaps:

On mitigation Climate pledges or NDCs

Without more we will leave the world on 2.7 degree pathway.

Those commitments based on technologies yet to be developed are at best reckless and at worst dangerous.

On finance we are 20 billion dollars short of the 100 and this commitment MIGHT only be met in 2023.

On adaptation- Adaptation finance remains only 25 % – NOT the 50:50 split needed given the warming that is already taking place. Climate finance to frontline SiDs declined by 25% in 2019. Failure to provide this critical finance and that of loss and damage is measured in lives and livelihoods being lost in our communities. It is immoral and unjust.

If Glasgow is to deliver on the promises of Paris, it must close these three gaps.

So I ask – what must we say to our people living on the frontline in the Caribbean , Africa and the Pacific when both ambition and some of the needed faces are absent?

What excuse should we give for their failure? IN THE WORDS OF EDDY GRANT ‘WILL THEY MOURN US ON THE FRONTLINE?’

When will we as world leaders address the pressing issues that are cause our people to worry – be it climate or vaccines? When will leaders lead?

Our people are watching and taking note.

Are we really going to leave Scotland without the resolve and ambition that is sorely needed to
save lives and to save our planet?

I have been saying to Barbadians, many hands make light work. Today we need
the correct mix of voices and ambition.

Do some leaders believe they can survive and thrive on their own?

Can there be peace and prosperity in one third of the world if two thirds are UNDER siege and
facing calamitous threats to their wellbeing?

What the world needs now is less than 200 persons who are willing and prepared to lead!!
Leaders must not fail those who elect them to lead.

There is a sword that can cut down this Gordian knot; it has been wielded before.

The Central Banks of the wealthiest countries engaged in 25 trillion dollars of quantitative easing in 13 years; $9 trillion in 18 months. Had we used the $25trn to purchase bonds that financed the energy transition, we would BE keeping within 1.5 degrees.

An annual increase in SDRs of $500bn for 20 years put in a Trust to finance the transition is the REAL gap we need to close, not the $50bn being proposed FOR adaptation.

OUR excitement one hour into this event is far less than six months ago in the lead up.

The world stands at a fork in the road; one no less significant than when the United Nations was
first created in 1945.

Will we act in the interest of our people who are depending on us or will we allow the path of greed and selfishness to sow the seeds of our common destruction?

It is in our hands. Our people and our planet need it.