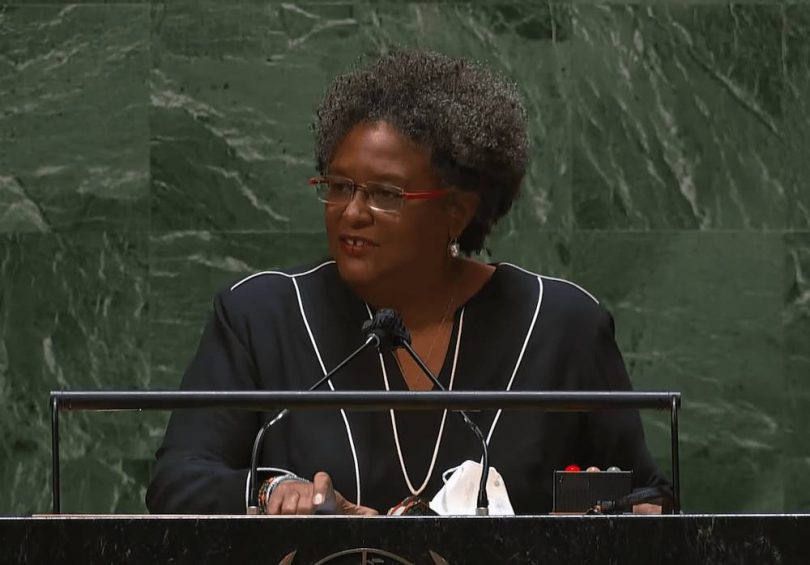 Mia Amor Mottley is the first female to serve as the Prime Minister of Barbados. She entered the office in 2018 and since then has become a strong advocate for her country, the Caribbean, and nations around the world that face major challenges such as climate change, the COVID-19 pandemic, economic inequality, racism, colonialism, and militarism. While she remained relatively unknown, she became the focus of attention after giving a speech to the United Nations General Assembly on September 24, 2021.

Mottley’s UN speech was notable for the challenges she put before the international body, asking pointed questions about COVID-19, fake news, burning of fossil fuels, weather disasters related to climate change, the astounding wealth of technology companies, and the lack of “moral strategic leadership” worldwide that implements policies and programs fairly to both small developing nations and their wealthier counterparts.

In an especially notable part of the speech, Mottley made reference to song lyrics by Bob Marley, the legendary reggae musician, social activist, and popular culture hero. After asking her series of rhetorical questions of the assembled UN body, Mottley invoked Marley and asked, “In the words of Robert Nesta Marley, who will get up and stand up?” Drawing on the song “Get Up, Stand Up,” a song written by Marley and fellow Jamaican Peter Rosh, she used the lyrics to criticize the UN for maintaining a state of inertia over its 76-year history rather than acting to resolve the critical issues facing modern societies.

Mottley garnered considerable attention in the global press with her Marley quote, and more people are asking more about just who she is and how she rose to become the first woman to serve as Prime Minister in the history of Barbados.

Mia Amor Mottley was born in 1965 in Barbados and attended Merrivale Private School there, as well as the United Nations International School in New York before attending Queen’s College in Barbados. She then earned a law degree from the London School of Economics in 1986. An attorney by profession, Mottley was called to the Bar of England and Wales and Barbados. She started practicing law in Barbados in 1987 and was also admitted to practice in the Caribbean countries of St. Kitts and Nevis, St. Vincent and the Grenadines, and Dominica.

In a public life marked by a series of “firsts,” Mottley became the first woman to lead the Barbados Labor Party and the Opposition; the first woman to become Attorney Generation, a post she held for five years; and the youngest person ever to be Queen’s Counsel in Barbados. In May 2018, she became the country’s eighth Prime Minister and the first woman in that role.

Mottley comes from a political family. Her grandfather, Ernest Deighton Mottley, was the first mayor of Bridgetown, the capital of Barbados, and her father Elliott Deighton Mottley was consul-general. Her uncle was a leader in the Christian Social Democratic Party (CSD).