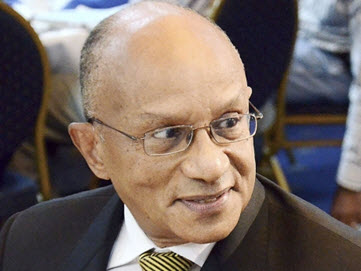 Professor Trevor Munroe, who the Gleaner newspaper called “One of Jamaica’s most brilliant sons, will deliver the 12th Annual CIN Lecture at Harlem’s Schomburg Center For Research In Black Culture in New York, November 17, 2016.  As envisioned by Mr. Stephen Hill, CEO of The Caribbean International Network (CIN), “The annual lecture attracts capacity audiences to participate in this unique exchange between Caribbean thought leaders and members of the New York Caribbean community”.

The lecture, created to present important intellectuals, is a community forum for hearing visionary Caribbean leaders who reflect on regional affairs and provide hope and direction for the future. Over the years speakers have been leaders, artists, policy makers, business leaders and scholars offering their own unique perspective.

Trevor Munroe is the Executive Director of National Integrity Action – the Jamaican Chapter of Transparency International, the leading global coalition against corruption. Dr. Munroe is one of the Caribbean’s most distinguished public scholars, with an outstanding career in academia, civil society advocacy and public service.

Dr. Munroe, the Jamaican Rhode Scholar completed his Doctoral Studies in Political Science at Oxford University and was the only person from the Caribbean invited to address the 110th anniversary of the Rhodes Scholarships, celebrated at Oxford University in September, 2013. As a civil advocate, Professor Munroe served as Director of United Way of Jamaica, was co-founder and subsequently President of the University and Allied Workers Union (UAWU)), a founding Board Member and Vice-Chairman of Citizens Action for Free and fair Elections (CAFE), Jamaica’s election observer group. He was also founding member of the Breakfast Club and Jamaica Speaks award winning current affairs radio programs. In 2015, Dr. Munroe served as a member of Transparency International’s Board Task Force on Strategy 20/20 and is the only person from the English speaking Caribbean to be a appointed an individual Member (IM) of Transparency International, one of the thirty IMs from across the globe.

This year’s forum will be streamed live from the Schomburg Center and rebroadcast on CIN TV reaching the over two million Caribbean-Americans in New York, New Jersey and Connecticut. Dr. Munroe’s presentation will cover “Curbing Corruption…Jamaica’s Imperative”. Admission to the event is free to the public with a reception at 6pm and program presentation begins at 7pm.  The Schomburg Center for Research in Black Culture is located at 515 Malcolm X Boulevard, Harlem, New York 10037; 212-491-2200.