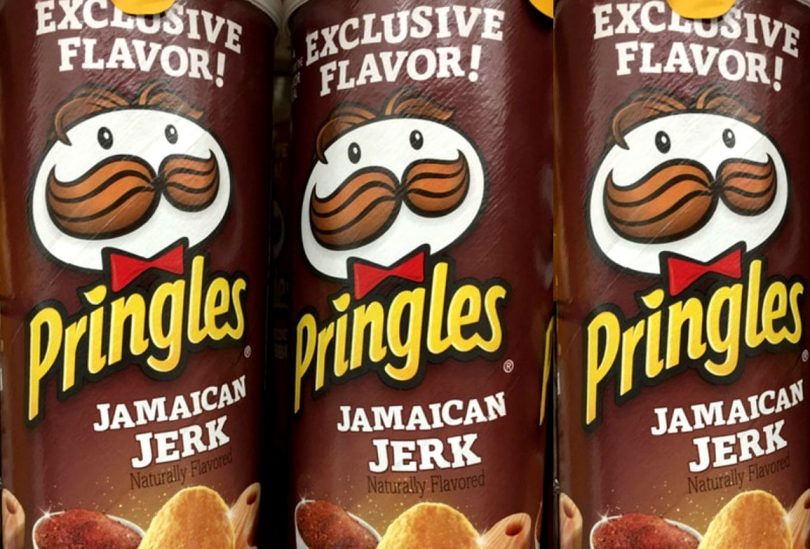 Pringles plans to introduce its Jamaican Jerk chip in March 2017, but it will be available only at the Walgreen’s chain of retailers. The flavor took second place in a survey asking customers what new kinds of Pringles they would like to see; Cheddar BBQ was the favorite and has been made available in the past. Other new Pringles flavors will include Sweet Thai Chili and Original Hot Sauce. While those who have sampled the Jerk chip is “reminiscent” of authentic jerk flavor, tasting smoky, salty, and having a “definite spicy kick.” Pringles Jerk chip includes paprika, onion and garlic powder among its ingredients, along with smoke flavoring. It does not include thyme or Scotch Bonnet pepper, which are essential to real jerk seasoning.

Pringles is a brand of potato and wheat-based stackable snack chips owned by Kellogg’s. Originally marketed as “Pringles Newfangled Potato Chips”, Pringles are sold in more than 140 countries, and it was the fourth most popular snack brand after Lay’s, Doritos and Cheetos in 2012, with 2.2% market share globally, compared to Lay’s share of 6.7%. The snack was originally developed by Procter & Gamble (P&G), who first sold the product in 1967. P&G sold the brand to Kellogg’s in 2012.

Pringles come in many flavors. Standard flavors include original, salt and vinegar, sour cream and onion, cheddar cheese, ranch dressing, barbecue, hot and spicy, and loaded baked potato. Some flavors are distributed only to limited market areas. For example, prawn cocktail, wasabi, and curry flavors have been available in the United Kingdom and the Republic of Ireland