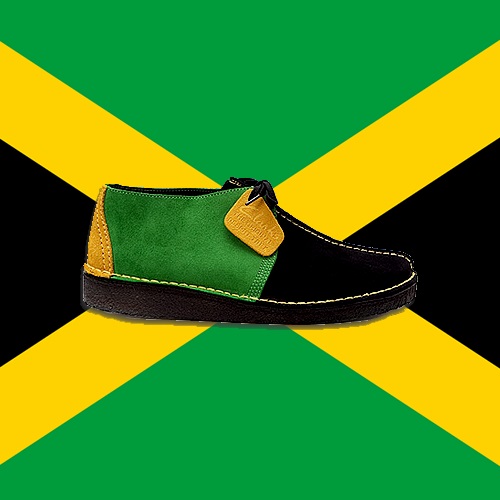 Jamaica has many national symbols. The national bird is the Doctor Bird. The national flower is the Lignum Vitae. The Blue Mahoe is the national tree and Clarks are Jamaica’s national shoe. Jamaicans love their Clarks so much that they are willing to spend considerable money to have them cleaned and restored. How did this happen? What makes Clarks so appealing to Jamaicans that the brand has become synonymous with the Caribbean island and immortalized in song and story?

Part of the answer lies in the high quality and comfort of the shoes. In the 1970s, Jamaicans got Clarks directly from the manufacturer in the UK, the country’s chief trading partner. At the time, Jamaica was a poor country, and many people only had one or two pairs of shoes, so quality construction and durability in addition to style were important factors in the choice of footwear. According to London-based DJ and Jamaican music fan Al Fingers in his book ‘Clarks in Jamaica,’ the comfort of Clarks was also important in a country where, in the 1970s, the common form of transportation for many people was walking. Clarks were the first “casual” shoe to be introduced to the mass market in Jamaica, as before trainers, casual shoes meant suede brogues. According to a history of Clarks provided by Vogue magazine, the design of the Clarks desert boot offers a “timeline of modern cool” that brings suggestions of the veldt in South Africa, the souks of Cairo, and other legendary and iconic locations like Kashmir, London, and Chicago in addition to the streets of Kingston. The long romantic evolution of Clarks can be traced from Nathan Clark, the great-grandson of James Clark, the company’s founder. He based his shoe design on the rugged but breathable footwear of British soldiers send to fight in Burma around 1941. These safari boots were acquired from a bazaar in Cairo for the Eighth Army in North Africa during WWII, and their design was based on a Dutch-South African style known as a “field shoe,” which had been worn in the area since the 1700s. In spite of its venerable history, however, Nathan Clark was told the shoes would never sell, and this was true until they found their market at a 1949 shoe fair in Chicago. The link to “American cool” combined with a minimalist design was just the thing the “mods” in Britain, who changed fashion in many ways, were looking for. The American actor Steve McQueen boosted the shoes’ “badman” credit on and off screen, wearing them in his iconic film “Bullit” in 1968. In addition to mixing what Vogue described as a “particular cocktail of dapper British gentility and commando roughness,” the shoes were practical and comfortable to wear in urban, tropical settings. This made the shoes very attractive to the “rudeboys” of Kingston. Clarks became symbols of a “gunslinger” lifestyle to such a degree that in the late 1960s, Joe Williams, a Jamaican police superintendent, raided outdoor dances hosted by Sir Coxsone Dodd’s sound system and divided the crowd of attendees into Clarks and non-Clarks segments in order to separate the rudeboys from “decent people.” By the middle of the 1980s, Clarks were viewed as the popular choice of rebels outlaws and reflected a trend among Jamaicans to identify with the glamor of the “bad” men.

With the police providing official censure, Clarks became even more popular, and by 1971, stores could not keep them in stock. They were prominently displayed on the album covers of influential reggae singers and deejays. The trend in the 1980s moved the romance of Clarks from album covers to song lyrics, with the first tune honoring the shoes recorded by Little John, “Clarks Booty.” The evolution of reggae music into the dancehall genre enhanced Clarks’ popularity as well, and Vybz Kartel recorded several songs about Clarks in 2010.  The love for Clarks moved into the hip-hop subculture among Brooklyn Jamaicans, and Clarks styles were part of the “b-boy” image in New York City. Clarkes are popular with reggae and dancehall artists. Clarks are popular with musicians, including Vybz Kartel, Popcaan, Little John, Jah Thomas, and Dillinger. Why Clarks are the Jamaican national shoes

So why are Clarks so popular among Jamaicans? For at least five reasons:

1) They are comfortable and durable.

2) They have a long and romantic history linked to fighting men and endurance.

3) They are associated with the glamor of societal rebels and outlaws.

4) They have been immortalized in Jamaica’s iconic reggae and dancehall music.

5) They have successfully adapted over the years to retain the essence of “cool.”