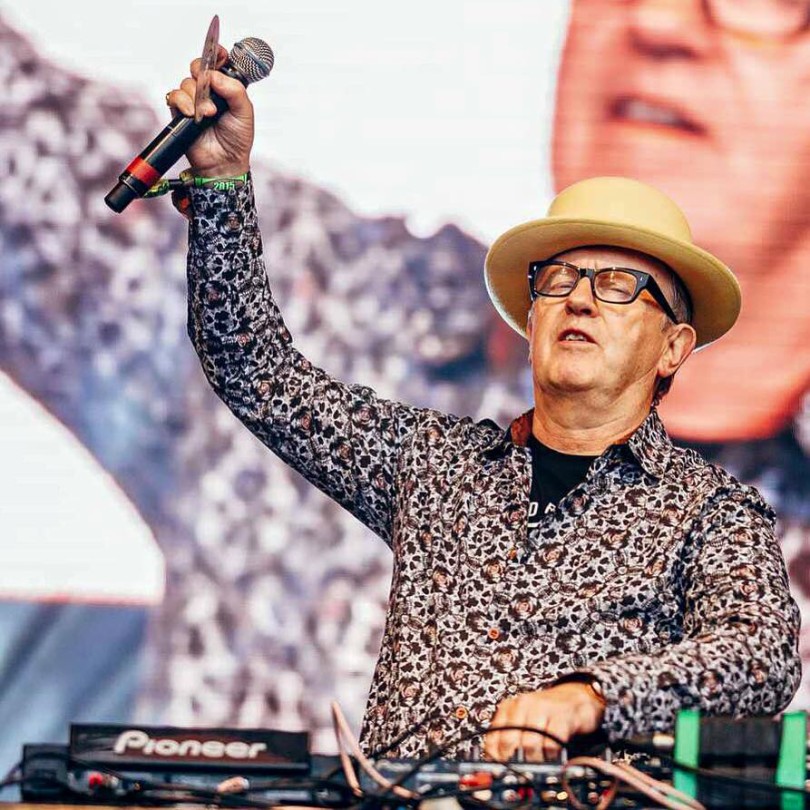 David ‘Ram Jam’ Rodigan  passion for Jamaican music began watching Millie Small perform her 1964 hit “My Boy Lollipop” at the Ready Steady Go! TV show as a school boy. David Rodigan left school in 1970 and went on to study economics in college and studying drama. During the 1970s and 1980s, Rodigan also worked as an actor and appeared in a variety of TV programs, including a part in the Doctor Who serial, The Mysterious Planet.

His passion for music, DJ-ing at school dances and youth clubs, overshadowed his acting career. Rodigan sold records in Oxford then Putney, before obtaining a job on Radio London, alternate with Tony Williams in 1978 on the Reggae Rockers program. A year later Capital Radio offered a permanent slot to present Roots Rockers for 11 years.

In 1990 David relaunched his radio career at London’s first legal 24-hour dance music station at Kiss FM. He resigned in protest over what he called the “continued marginalization” of the reggae genre. Rodigan was appointed Member of the Order of the British Empire (MBE) in the 2012 New Year Honors for services to broadcasting.

30 years ago Rodigan’s sound system clash with Barry G at the Empire Skating Rink in Brooklyn, New York was epic. It was also the talk on two continents and in Jamaica. Both Rodigan and Barry G will attempt to recapture the greatness of 1985 at NY Resorts World Casino this November.

He has now signed up to host a two-hour Sunday evening show on Radio 1 Xtra from 17 February, and will also return to Radio 2 to host a 13-part series in the summer.

S.E.S: Who is David Rodigan?
Rodigan: I am a radio broadcaster with the BBC and I also play reggae music in clubs and music festivals in the UK and Europe.

S.E.S: How did David Rodigan get the name “Ram Jam?
Rodigan: Ram Jam was a nickname given to me because I loved Jackie Mittoo’s organ instrumental ‘Ram Jam’ so much. I considered it ‘my signature tune’; it was a thing in those days (‘60s) whereby DJ’s had signature tunes, and Ram Jam was mine. S.E.S: Dubstep and other new genres of music are offshoots of reggae, how has that development impacted your career?
Rodigan: Dub Step had a major impact on my career 5 years ago when it was at the height of its popularity and my voice was sampled onto a massive Dub Step hit called ‘Hard’ by an artist named Breakage. That track brought me into direct contact with the Dub Step audience and from that encounter I started playing reggae and dub-wise music at dub step events.

S.E.S: What is it about the Jamaican music why so many millions around the world have embraced the music and the culture?
Rodigan: Essentially the roots of great JA reggae music has always been about standing up against injustice, people rights, embracing humanity with a message of hope and understanding, epitomized by the songs of Bob Marley and other great icons. It was not a music that oppressed people it was a music that gave people hope. Aside from the messages contained within it the music was also great to dance too as well. Its chief protagonists projected a life of liberty and freedom that rejected the world of consumerism; a life of peace and tolerance was celebrated and encouraged through the teachings of Rastafari.

S.E.S: David, in the recent past you have been one of many critics of quality of reggae music coming out of Jamaica, what is your opinion of the reggae music coming out of Jamaica today?
Rodigan: Yes I have been critical of the lack of quality control in much of the new music emulating from JA. One problem could be that I simply ‘don’t get it’ that it’s not ‘meant for me’, that it’s beyond my scope. Be that as it may I still believe that much of the music is not very well produced, technically speaking. Music made on laptops is all very well, but it has to go to a higher level in terms of the final sonic sound. That part at least has to be achieved and in many cases it’s not. The sound is being referred too as ‘island pop’ which I guess is very apt; however, it doesn’t seem to export very well. But not all aspects of the music suffer such a fate, for the new roots rock reggae movement is very strong and has a future, in my opinion. S.E.S: At one point in your life you had to choose between acting and broadcasting/DJ’ing, why did you choose the DJ’ing and was it a difficult decision?
Rodigan: I chose to become a full time radio dee jay in 1990 when Kiss FM invited me to present a daily radio show. I was getting more requests for work from the world of broadcasting by the late 80’s and it was becoming very hard to support my family on the unpredictable income of an actor. I had trained as an actor and worked in various theatre companies as well as appearing in various TV shows, so yes it was difficult to let it all go, but I had to.

S.E.S: As you celebrate today, the 30 years anniversary epic clash between you and Barry G at the Empire Skating rink in Brooklyn, looking back, give us thoughts of what is was like back then and how do you see it now?
Rodigan: 8 It was a very different world 30 years ago, it was slower, more chilled, people weren’t in so much haste. And that reflected in the music being made and the way it was played in dances. Songs played out almost from beginning to end, the selectors allowed you time to take the songs in, to digest them (so to speak) to enjoy them. But now everything is so hype, songs play for 30 seconds and get jacked up with selectors screaming all over the song whilst its playing for those 30 seconds. I have totally lost sight of how that can be entertaining, because for me it’s a headache. I come out to hear songs not selectors. Selectors are supposed to play the songs so we can actually hear them. Life is not one big forward and a selector’s round of playing cannot consist of non-stop forwards where he or she is playing every song qued up from the chorus. Madness.

S.E.S: Sound clash between competing sound systems and DJ’s is an importance aspect of Jamaican music, Talk about the why sound clash’s plays such an important role in Jamaican music?
Rodigan: Sound clash is a way of heightening the excitement of presenting and listening to music; it’s a form of musical chess and when it is done well it can be very entertaining.

S.E.S: What is your contribution to the phenomenon sound clash in dancehall reggae?
Rodigan: My contribution to sound clash culture is to use humour and respectful selecting when playing against my adversaries; allowing the music and the speeches I make to resonate and impact on my fellow competitors whilst refusing to allow myself to be dragged down to the level of foul language and personal abuse. The person who starts shouting and being verbally abusive is usually the person who has already ‘lost the argument’.