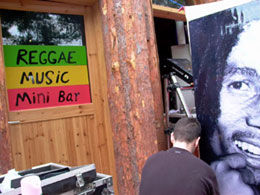 Robin Liao is the owner of a bar named Together, which is the first reggae bar in Beijing, the Capital of China. He and his wife Judy started it in Feb 2005. It is now a part of the Beijing culture. Robin’s goal, as impossible as it may seem, is to educate the 1.3 billion people in his country about reggae. It is a word more than 99% of the population has never heard..

Q: Where did you get the idea to come up with the club?
When my wife wanted to start a bar, there was no reggae bar in Beijing, so just because nobody introduce it, I think it will be a good idea.

Q: Much of popular reggae today has lyrics that many consider lewd. How do you handle these lyrics in China? Is it overlooked because the lyrics are in Chinese.
The problem is most of Chinese people don’t understand English.

Q: Do you also sing reggae music? Are there any Chinese Reggae artists?
I don’t sing if you mean I compose songs. But I love to sing reggae songs especially by Bob Marley. My favorites is “Soul Rebel”

Q: Are you aware of the Annual Reggae Snowsplash in Japan? Do you plan to go this year?
Hope I could, but I know I couldn’t, I’m a poor man like the song name, run a reggae bar can’t make money, we should thanks JAH if don’t loss money.

Q: What is the reggae scene like there?
It has about more than 10 different Chinese translation of reggae, people got information of reggae just like 10 blind people touch the elephant, and so they guess what is reggae like and who is Bob Marley.

Q: How about the ska scene?
Ska is a lit bit more well know even played by Chinese musicians but I don’t know why, maybe the speed is faster… some of the Chinese music fans accept Ska easier then reggae. Indeed, it’s hard to let people stop from 120bps(disco house etc. which are the most popular thing for normal Chinese young guys) to reggae suddenly.

Q: What first drew your attention to Reggae?
I knew reggae from my old boss who is a French guy was born in Africa. The first second I was moved by its special beat and guitar. At that moment what I can say is only “this is very different with all other music I’ve ever heard” and the next question to my boss is “what is that”.
My boss was surprised by that and he played the CD in his car one by one to the last one, when I said I really never heard anyone of them, he was angry, open the door of the car then tell me “get off”. Of course he was kidding me, but this is a typical image of most Chinese people and most of foreigners, they think reggae is same in china like other country, people should know Bob Marley like John Lennon, because they are 2 of the greatest artist in the last century, but the reality is ….

Q: What was the first Reggae song you ever heard?
I guess should be one song by Alpha Blondy.

Q: Who and what are your influences?
I opened a reggae bar in last year, but the reality is more than 40 country’s people come, very less Chinese, but I’m trying to influence more Chinese people by writing article on magazine and make co-operation with some recording company such like universal music, you know they just released the 1st reggae CD in China, that is Bob Marley (LEGEND).

Q: What style of reggae is played often in your country? [Dancehall, Lovers Rock, Conscious etc.] What style do the majority of fans seem to prefer?
Play? If you mean play CD like a DJ, maybe all kinds of reggae, there are some black people in Beijing they play Reggae music in some club rarely, but in my bar, I play all kinds of reggae families. Reggae Ska Dub Dancehall Rocksteady 2-tone jazz-reggae and ragga…
I guess Dub is easier to be accepted because of its sound like drum and bass by many people.

Q: Was the fact that Reggae is English and Patois a barrier?
That is the biggest problem, because 1st most of Chinese can’t understand English, 2nd lyrics for reggae is extremely important.

Q: Is Reggae mainstream and is it played on the radio there? Are there videos on TV?
Not at all and maybe played in TV when they have a program about Jamaica.

Q: How would you describe your country’s reggae sound and development?
It’s happening, some of Chinese musician had already sing some thing like reggae, and they are going to make more, but they are very less part of all musicians. Media will be very important or I can say will be the key of the case.

Q: What are some of the names of the popular local artist? Who would be the top 5 artists?
Maybe Cuijian is always called as “god father of Chinese rock roll” but he doesn’t think so and doesn’t care, and Wanglei ..

Q: Who is your favorite Reggae Artist?
Too many, Bob Marley / Jacob miller / Israel vibration/ I like majek fashek..

Q: Where do you think Reggae will be in 10 years time? And in Your country?
I really hope reggae can be know by more people in China, but I can’t look ahead it will be very popular in China.

Q: Do you think there is anything preventing Reggae from flourishing?
English and different culture background.

Q: How are you involved in Reggae?
I’m not musician; hope I could be a music selector

Q: In some countries you might see people wearing a Jamaican-style hat with fake dreadlocks attached when they attend reggae concerts and other events. Do you see anything that you see in your country?
Well, you might find it. But it’s very rare! It’s easy to see people with a dreadlocks, but they are not Rasta, just feel it’s cool, just like a song sang, you are not a Rasta even with a dreadlocks, but the real Rasta maybe skin head.

Q: Have you ever been to Jamaica?
I had a dream..

Q: Do you have many/any Jamaican people living there?
Very less, the Jamaican embassy has only 5 people. The Jamaican ambassador of China was the 1st Jamaican I met in our bar.

Q: Do you eat Jamaican food? Like what?
Used to taste the chicken cooked by some Jamaican people here. But I don’t eat meat usually.