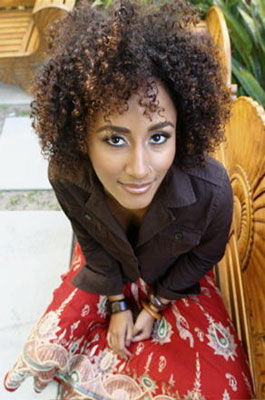 This month our series “Reggae Around the World” we interview reggae artist Irie Love. She was born and raised in Hawaii in a little town called Kailua on the island of Oahu. She has the opening for the major reggae acts that would come to Hawaii such as Steel Pulse, Don Carlos and the Marleys, to name a few. She recently signed with Morgan Heritage’s production company Gedion Music and has been touring with them. We interviewed while she was in Jamaica for Sumfest 2007.

Question: What is the reggae scene like there?
Reggae is the most popular genre of music in Hawaii. Most of the stage shows are reggae shows and even the local bands are influenced by reggae. They call their music “Jawaiian” which is a combination of Jamaican and Hawaiian music. The two top radio stations (98.5FM and 100.3FM) are predominantly reggae stations as well.

Question: What first drew your attention to Reggae?
The whole culture of reggae music is built on positive vibes, which is what I’m all about. My father would play reggae music in headphones on my mother’s stomach while she was pregnant with me. And growing up in Hawaii I’ve always had a lot of exposure to reggae music.

Question: What was the first Reggae song you ever heard?
I can’t remember the song but I can remember the artiste; Buju Banton.

Question: Who and what are your influences?
Im influenced by Jazz, Soul, R&B and Reggae music. People like Erykah Badu, Stevie Wonder, Beres Hammond, Etta James, Lauryn Hill, and of course Bob Marley both lyrically and musically.

Question: What style of reggae is played often in your country? [Dancehall, Lovers
Rock, Conscious etc.] What style do the majority of fans seem to prefer?
One Drop and Lovers Rock are definitely the most popular forms of reggae in Hawaii. Dancehall aristes such as Beenie Man, Elephant Man and Sean Paul will get a few spins and some performance spots on reggae festivals but for the most part we are into the roots music out there.

Question: Was the fact that Reggae is Patois a barrier?
I remember as a child I would ask my father “what language they speaking?” Whenever he would play reggae music and he would always say one day you will understand. After so many years of listening it was easy for me once I decided to make reggae music my chosen genre for my music.

Question: Is Reggae mainstream and is it played on the radio there? Videos on TV?
Reggae is very mainstream. There aren’t very many stations that play videos though. We need a place for reggae videos to get more play in Hawaii. We have a few public access stations but other than that no.

Question: How is Reggae influencing your culture?
Jamaica and Hawaii have very similar attributes in their cultures. The laid back vibes. The love of food.

Question: If someone traveled to visit your home and wanted to hear reggae music what would they have to do?
Go to any live music venue. Reggae is everywhere! We have a weekly newspaper that gives all the info for weekly entertainment called Honolulu Weekly. Or tune your radio to 98.5FM the number one reggae radio station.

Question: How would you describe your country’s reggae sound and development?
It’s pretty much stayed the same roots vibe

Question: What are some of the names of the popular local artist? Who would be the top 5 artists?
Fiji, Ekolu, Irie Love, Natural Vibrations and Ooklah the Moc

Question: Who is your favorite Reggae Artist?
Morgan Heritage and Buju Banton

Question: Where do you think Reggae will be in 10 years time? And in Your country?
The one drop style seems to be on a rise again. I’m hoping that it will continue. We need to bring back the positivity in our music.

Question: Do you think there is anything preventing Reggae from flourishing for you and your fellow artists there?
Radio exposure. Radio is corporate in Hawaii so the same songs get played over and over again. We need more variation. There are so many artistes that don’t get their deserving exposure.

Question: Tell us about what you have been doing in the “Reggae” world?
I recently signed to Morgan Heritage’s production company Gedion Music. I am currently working on my debut reggae album to be released in early 2008. Since April 2007 I have been touring the world with MH as their opening act.

Question: How many albums have you released?
None. My debut is due for release early 2008. I have been featured on many compilations but this will be my first solo album.

Question: In some countries you might see people wearing a Jamaican-style hat with fake dreadlocks attached when they attend reggae concerts and other events. Do you see anything that you see in your country?
Definitely. All of that. Hawaiian people love to emulate the Jamaican culture!

Question: Have you ever been to Jamaica?
Yes. I am here now. I just performed at Sumfest with MH. I have been, for the most part living here since December of 2006. Whenever I’m not on the road I’m in Jamaica.

Question: Do you have many/any Jamaican people living there?
Not very many. I knew of two Jamaicans the whole time I was growing up. Hawaii is so far from Jamaica. It’s definitely not an easy migration.

Question: Do you eat Jamaican food? Like what?
Yes! Ackee and Saltfish with cooked food is my absolute favorite!

To learn more about Irie Love visit her website at: http://www.irielovemusic.com/bio.html