Miami’s Magic City Casino was the place to be on Saturday, January 12th in order to witness the breathtaking performances given by reggae pioneers—The Wailers and Toots & the Maytals.   The Wailers band got things started with the thumping basslines and rich sounds of reggae music a little after 7pm in the outdoor Amphitheater section of the Casino complex.   Founded in the early 1970’s by bassist Aston ‘Familyman’ Barrett, and joined by guitarist, Donald Kinsey, the iconic Wailers band most notably recorded, performed, and toured the globe alongside the ‘King of Reggae’—Bob Marley. 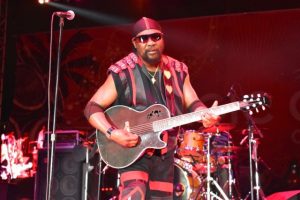 The unmistakable spiritual vibe of Bob was certainly palpable as Wailers’ lead singer, Joshua David Barrett and a pair of harmony singers, effortlessly served up to the captivated audience their rendition of many of Bob Marley and the Wailers’ most unforgettable songs—‘Easy Skankin’, ‘Rastaman Vibration’, ‘Jammin’, ‘Buffalo Soldier’, ‘I Shot the Sheriff’, ‘Get Up, Stand Up’. The canopy of a clear Miami night sky was the perfect setting for the delivery of the Bob’s endearing message of love for Jah Rastafari, Rastafarianism, and peace and unity throughout the world.   The Wailers then got the jubilant audience in a frenzy when they dished out ‘Exodus…Movement of Jah People’—yet another classic.  In fact, the Bob Marley and the Wailers’ Exodus album had been anointed the Album of the Century by Time Magazine. 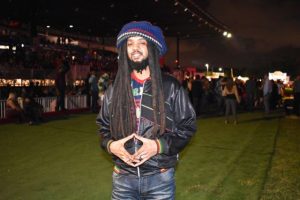 Owen ‘Dready’ Reid of the Wailers

One of the early influencers who paved the way for the emergence of the Rastafarian religion was Jamaican, Marcus Mosiah Garvey, who was said to have prophesized the crowning of a black king in Africa.  That is, in 1930 a man by the name of Ras Tafari Makonnen—who became more popularly known as Haile Selassie I—was crowned Emperor of Ethiopia.   In Jamaica, meanwhile, followers of the then burgeoning Rastafarian movement and religion commonly referred to Haile Selassie I as ‘Jah’, ‘Jah Jah’, ‘Jah Rastafari’, or ‘His Imperial Majesty’ (‘H.I.M’).   And at his coronation, Haile Selassie I was praised as the ‘Power of the Trinity’, ‘Lord of Lords’, and ‘Conquering Lion of the Tribe of Judah’.  In the eyes of many, Haile Selassie I was perceived as the fulfillment of Marcus Garvey’s earlier prophecy.   To that, Marley became a devoted follower of the religion, and Bob’s advocacy certainly stoked the popularity of Rastafarianism during the 1970’s in not only Jamaica, but across the world as well.  Marley soon became a global symbol where ‘Rastafarian values and beliefs’ are concerned—which gave him a chance to fully express his Garvey influenced faith in ‘Jah Rastafari’ and ‘Rastafarianism’ through his impactful reggae music.   Bob’s dreadlocks, of course, became a hallmark indicator of his Rastafarian religion which today can be seen virtually all walks of life—whether for religious (Rasta) or fashion purposes. 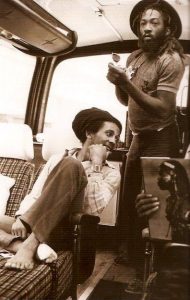 Bob Marley and Road Manager, Tony ‘Gilly Dread’ Gilbert in 1977, while on the Exodus Tour in Europe After a thirty minute intermission (band change), it was then time for another collective of musical titans, Toots & the Maytals, to take to the stage at 8:30pm.  As one of the most highly acclaimed and perennial ska and rocksteady vocal groups off all time, Toots & the Maytals was formed in the early 1960’s.   The group first achieved music chart success after Jamaican studio producer, Clement ‘Coxsone’ Dodd, recorded them at the famed Studio One recording studio in Kingston.    With colossal song hits such as ‘Pressure Drop’, ‘Sweet And Dandy’,‘54-46 (That’s My Number)’, ‘Monkey Man’, and ‘Funky Kingston’, it was not at all surprising for the venerable Rolling Stone Magazine recognize the group’s frontman, Toots Hibbert, as one of the top 100 greatest singers of all time.  What’s more, the Maytals alongside Byron Lee won the inaugural Jamaican Festival Popular Song Competition with their original ‘Bam Bam’ tune—which was later covered in dancehall style by Sister Nancy and has been a worldwide reggae/dancehall anthem ever since.   But even more significant, in 1968 Toots & the Maytals released a single titled, ‘Do the Reggay’—the first song ever to feature the term ‘reggae’, thereby not only putting a name to the music, but also in unveiling the genre and introducing it to the world.  And that is something that we all have to be thankful for as reggae music lovers.  Indeed, fascinating stuff where the history of reggae music is concerned. So in many respects, the performance of reggae forefathers, Toots & the Maytals, in tandem with the legendary Wailers, turned out to be nothing short of an all-star reggae music celebration that was enjoyed by the young and the old alike at Miami’s Magic City Casino Amphitheater.   Oh what a night!  And in the words of Tony ‘Gilly Dread’ Gilbert, former road manager of Bob Marley and the Wailers, who was also in attendance, “We just determine fi continue di [Marley] work.”