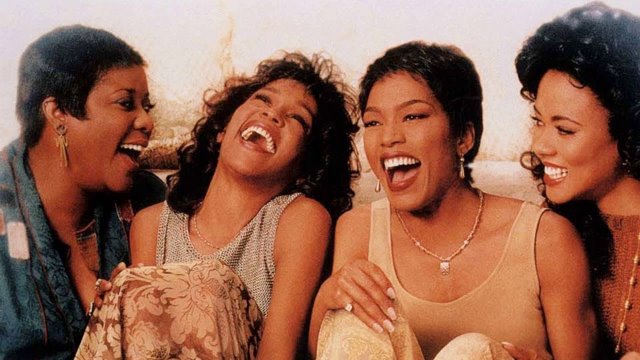 I finally watched Waiting to Exhale. Controversial thoughts in 3…2…1…That film was some Tyler Perry-levels of overly dramatic and corny shenanigans. Forest, I didn’t know you had it in you.

Everything Angela Bassett’s character did would land you court-ordered domestic violence classes and probably even lose your kids—the very thing she was fighting for.

I bet Wesley Snipes’ character ain’t even had no white wife with cancer. His entire backstory was some master-level pickup artistry.

If Angela Bassett was so good at business, why didn’t she sell her house, downsize and start her own venture? Since she helped to create such a successful company, she could do like rich white kids and “bootstrap.” Beloved, the boots already strapped; leverage your network, net worth, and other resources.

After watching Waiting to Exhale, I searched “Whitney Houston crack timeline”. Thanks, MTV for being so diligent and putting that together. I tell you if you want to know about something, the internet will have the answer. Anyways, I wonder if they gave Whitney that dialogue as a way to drop some hints. The movie was so bad that I’m not reading the book to find out if that part was them taking creative license.

Speaking of Whitney’s characters, are moms really out here telling their children to date married people who won’t leave their spouses? With such scallywag life advice, it’s no wonder Whitney Houston’s character’s mom only had $67 in her bank account. Foolish.

I can’t believe I waited almost twenty-five years to watch Waiting to Exhale—is this the iconic film that had so many black women empowered and ready to leave their men??? Well, the film is trash, but the tunes still slap.

Finally, did y’all know that Forest thee Whitaker directed Waiting to Exhale? Yup, The Last King of Scotland was serving cinematic Tyler Perry realness before Tyler Perry was real. Perry probably saw how y’all supported the film and said: “I can do that!” LOLz.

So yeah, give me my Black card for finally watching Waiting to Exhale. Now revoke it because I hate it.

Shout out to Tyler Perry for knowing his core fan base and sticking to his storytelling guns.