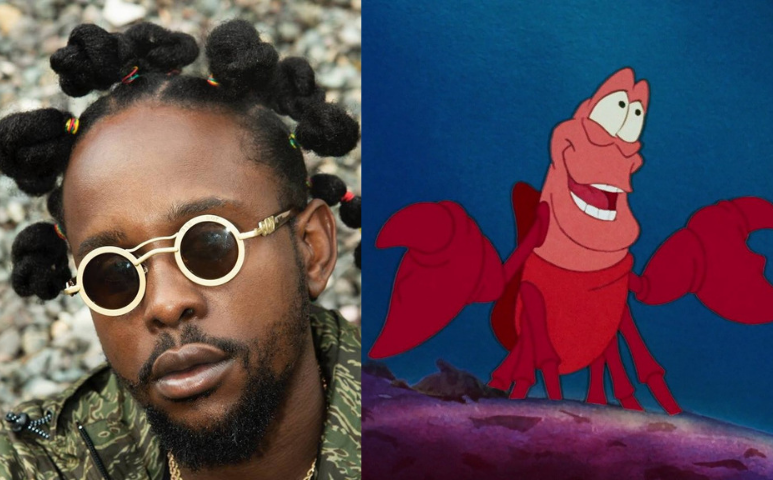 Fans of dancehall artist Popcaan are fully in favor of the star taking the tole of “Sebastian” in Disney’s “Little Mermaid.” The production of a live-action version of the iconic story is in the works, and fans of the original film are making suggestions about who should play critical parts in the remake. To date, actress Halle Bailey has been cast as “Ariel,” a move that created some upheaval in the fan base as she is African American. There appeared to be some thinking that a black actress cannot play the role of a mermaid. And some debate continues about who is likely to play the character “Sebastian the crab,” who used a “fake” Jamaican accent.

Dancehall star Popcaan made his debut on the film screen in “The Intent 2” is ready for his next big move on the Hollywood scene, and one of his fans tagged him and Disney both in a Twitter post that has garnered considerable attention. In the tweet, the fan wrote, “Guys hear me out, Popcaan as Sebastian the crab,” and added two photos to boost the idea. One photo showed Popcaan and an image of Sebastian.

The artist responded in his usual way saying “Trouble.”

There is considerable support for a Jamaican with a real Jamaican accent to play the character that spoke with the “fake” accents in the previous film. There are MANY Jamaican actors who could be in contention for the role, and fans believe that Popcaan is certainly among them.

If Disney selects a Jamaican actor for the role of Sebastian, a lot of people on the island would be very happy. Disney has not yet revealed a full list of cast members, so fans continue to advocate for Popcaan.