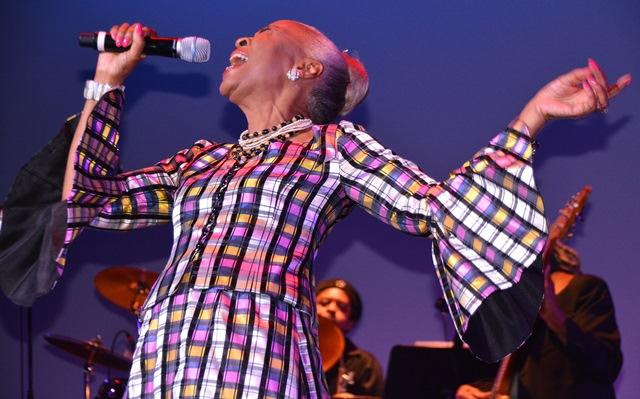 The audience stood and cheered, offering a lengthy and loud applause, expressing their appreciation for the treat just experienced. They did not beg for more; satisfied to just soak up the moment.  “Simply Myrna” lived up to all it promised, as Jamaica’s First Lady of Jazz and lovers rock, Myrna Hague stood center stage and graciously accepted the love.

The initial Florida presentation of “Simply Myrna” at the Miramar Cultural Center on Sunday, April 17, was delightfully entertaining. A pleased Audrey Anderson of Pembroke Pines commented, “What a great classy, well put together Show!! Everyone did a fantastic Job,” as she filed out of the theater pleased and satisfied.

A fundraiser for The American Foundation for the University of the West Indies, (AFUWI) the show opened with a video featuring a scholarship recipient testifying to the benefits of the organization’s work. A brief welcome by Miramar’s Mayor, Wayne Messam and a plea for the audience to give generously made way for showtime.

Myrna Hague got the show going with her rendition of “Over the Rainbow” and immediately had the audience’s attention. “Thank you for having me here in Florida, we’re going to have a good time tonight… it is a privilege to perform for you, especially benefiting the University of the West Indies of which I am an alumni,” Hague continued to deliver a mix of jazz standards and reggae classics ably backed by guitarist Eugene Grey and his band.

Guest, Ian Sweetness opened his set with Nat King Cole’s “Unforgettable” followed by his hit Blue Moon” and closed with “Little Green Apples”. Myrna reappeared wearing a body fitting blue gown with white shoulder accents.  She headed into the audience to interact with male members of the audience as she performed “Daddy’s Girl”.  After a brief intermission, Florida UWI Alumni Association members Ms. Margaret Barrett and Mr. Donat Grant were recognized for their outstanding contribution to the organization with the Pelican Awards, presented by Jamaica’s Consul General, Franz Hall.

A. J. Brown joined Myrna to perform a mesmerizing duet of “Moody’s Mood” and continued to perform his hit “Father Friend”, but it was his delivery of the Italian classic “Time to say Goodbye” that had the audience on their feet begging for more. The show closed with Myrna delivering a stirring rendition of Tina Turner’s “Simply the Best”. Myrna Hague had made her mark on Florida and organizers promise that “Simply Myrna” will be back for 2017. 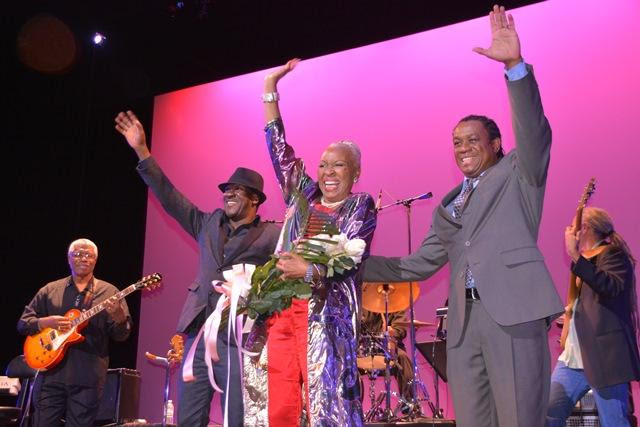 L-R: Eugene Grey, Ian Sweetness, Myrna Hague and A. J. Brown wave to the appreciative audience at the close of Simply Myrna, staged at the Miramar Cultural Center in Miramar, Florida on April, 17, 2016. 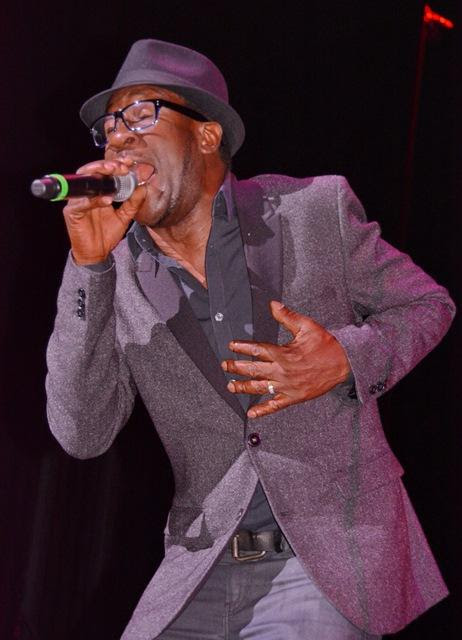 Myrna Hague belts out the opening number at Simply Myrna at the Miramar Cultural Center in Miramar, Florida on April 17, 2016
Rate this post