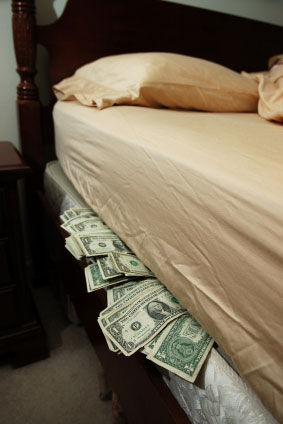 Recently, while preparing my living room chairs for re-upholstering, I turned them over to see what stray items might have fallen inside the frames. From the jingling sounds I heard, I realized that several coins had slipped into the lining of the chairs. As I cut away at the fabric and the money fell out, I counted up J$150 that had previously been lost to me. It wasn’t a fortune, but it was enough to buy lunch the next day.

While I was happy for the unexpected small bounty, I reflected that perhaps for several months or years I had sat on this money, which could have been put to better use. It then occurred to me that there have been times when I had figuratively ‘sat on money’ by neglecting to manage my investments effectively or by procrastinating on money making ventures. In fact, if we take this analogy even further, many of us never see our financial dreams into reality because we are guilty of ‘sitting on our money.’

What are some of the ways in which we sit on money?

We’re probably all guilty of this one- leaving a small sum of money in a savings or chequing account that we no longer use. Occasionally, the banks publish long lists of people who have money sitting in dormant bank accounts for several years. The banking laws require institutions to send deposits over a specified amount to the Bank of Jamaica if they have been unclaimed.

I vividly remember the day I received a statement regarding a chequing account that I had left dormant for nearly a year. Little did I know that the bank had started charging for inactive accounts. The statement showed my starting balance of a few hundred dollars dwindling in each successive month as the bank subtracted its service charge and penalty, until the money had disappeared. Although it was not a large sum, I would have been happier if I had put the money to good use.

Here’s an example of how ignoring money can be costly: the sum of J$3,000 in a forgotten bank account could have been doubled in nine years, if it had been invested in a money market account earning eight percent interest annually. Even better, if it had been used in a small business venture to purchase and re-sell a quick-moving product, that J$3,000 could have doubled itself several times over in a year! Let’s all make an effort to dig up those old bank books and reclaim our neglected money before it vanishes.

Another major way in which we sit on money is when we leave funds stagnating in bank accounts with small, taxable interest rates, for years and years. I know of clients with over a million dollars earning five percent in regular savings accounts. Leave the bank accounts for your very short term savings goals and emergency funds, and place your long-term funds in investments that are appropriate.

Let’s say you had J$50,000 that was intended for a long term goal such as retirement. If you kept that money in a regular bank account earning an after-tax rate of three percent per annum, you would have accumulated approximately J$78,000 after 15 years. However, if you had invested the principal in a tax-free long-term account earning ten percent per annum, you would be looking at over J$218,000 in that same time period. Also, when we fail to take the effect of inflation or depreciation of the Jamaican dollar into account when we’re planning for our long term investments, we might as well be literally sitting on that lost money.

Many of us sit on money when we ignore our God-given talents or business ideas. How many times have you thought of pursuing some viable idea of making money, only to let fear, procrastination or tiredness prevent you from going ahead? Have you gone through the rigours of getting higher education, but not bothered to persist until you found a higher-paying job to make it all worth your while?

Sitting on your potential is just as bad, if not worse, than sitting on your money. Be inspired by the examples of successful business people and high achievers who have persisted with their dreams despite difficulties and setbacks. Don’t neglect the money and talents that you already possess, as you strive to achieve your financial dreams. Stand up and make good use of them!

About the Author
Cherryl is a financial columnist, consultant and coach. See more of her work at www.financiallyfreenetwork.com and www.financiallysmartonline.com.