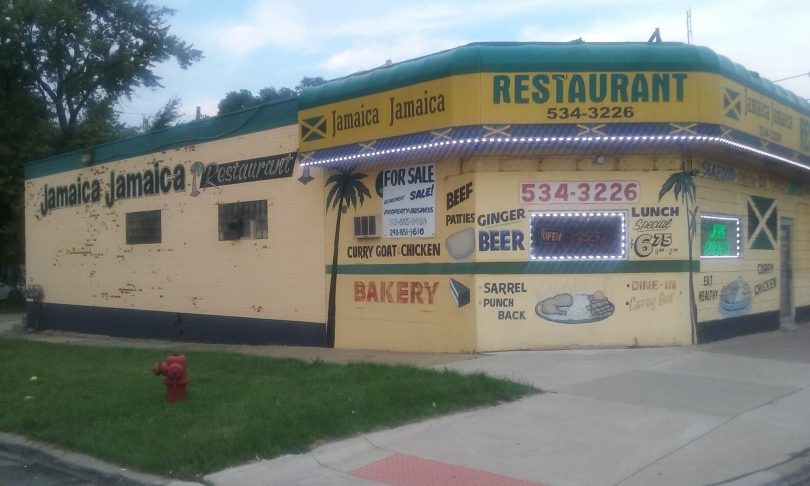 Despite its small size, the Jamaican population of northwest Detroit, Michigan, has the chance to dine at several restaurants devoted to serving up the tastes of home. Some of these eateries launched 35 to 40 years ago as Jamaicans traveled to the city in search of jobs in the auto industry, and others starting up relatively recently. New entries into the restaurant business in the area are specializing in vegetarian and vegan cuisine. According to the owners, their customers comprise chiefly African-American and Jamaican people living in the nearby areas, and while Jamaican culture is not yet part of Detroit’s city fabric, the region is becoming more multicultural. Much of the food served in northwest Detroit’s Jamaican restaurants is similar to what is found in Kingston and Portmore, with some African-American influences mixed in, as represented in BBQ jerk chicken. The most popular dishes among diners are jerk chicken and Jamaican oxtail, however.

At the Caribbean Citchen restaurant, which started in 1994, the chefs are very liberal with the scotch bonnet pepper, making the spiciest jerk chicken and oxtail in town. Served with semi-sweet red beans and rice with a side of plantains and steamed cabbage, diners never go away unsatisfied.

The Jamaica Jamaica Restaurant and Bakery is known for its standout curry chicken, which features tender meat that falls off the bone, smothered in a curry sauce of onions, carrots, tomatoes, and “just right heat.” This is served with seasoned beans and rice and some fried sweet festival bread.

Rono’s Caribbean Family Dining has been in operation for 35 years at the same location. Currently, it is carry-out only as the dining room is being renovated. Jamaican oxtail is the dish to try here: it is known city-wide as the best. The restaurant’s take on jerk chicken features half of a smoky-flavored chopped bird served with red beans and rice and cabbage. The coconut drop is the recommended dessert and to drink, try the home-bottled pink lemonade.

The Jamaican Pot restaurant uses all fresh ingredients and serves up some of the healthiest Jamaican offerings. The chopped jerk chicken comes on a mound of beans and rice, and the steam cabbage manages to remain crunchy for some added complexity in the dish. Curry goat and fricassee chicken with its gravy flavored with garlic, onions, scallions, and thyme are also signature dishes. The vegetarian-friendly venue also offers the Bob Marley, a mix of a mishmash of red beans, butter beans, scallions, carrots, and other root vegetables served in a ginger sauce over white rice. The full line of desserts features an upside-down pineapple brownie and coconut drop.

Paradise Café & Juice Bar has yet to open, but it will feature homemade Jamaican drinks including sorrel, sea moss, and ginger brew. Dinners will offer jerk barbeque veggie patties made from black-eye peas and covered in a special house sauce. Desserts include a peach-mango cobbler that mixes African-American and Caribbean flavors.