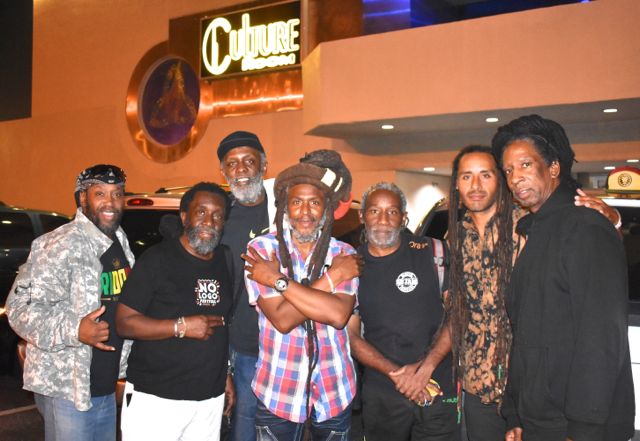 The legendary British roots reggae band collective, Steel Pulse, kicked-off its return to South Florida on December 28, 2018—the first of two shows on consecutive nights.   It would be remiss to not give a little historical background where the iconic Steel Pulse is concerned.  Originally formed in Birmingham, England in 1975, Steel Pulse are the inaugural non-Jamaican born act to win the Grammy Award for Best Reggae Album—for their album, Babylon the Bandit.  Later on, they were invited to perform alongside Burning Spear—another well-respected roots reggae group.   Steel Pulse then garnered the attention of Island Records.  From there, the rest is history as they say.   Through the years, Steel Pulse has become a household name across far reaches of the globe in having headlined some of the world’s largest reggae festivals, including Reggae Sunsplash, Japan Splash and the annual Northern California ‘Reggae on the River’ Festival—just to name a few.  What’s more, the band contributed to the Police’s Can’t Stand Losing You reggae compilation, as well as to the soundtrack of Spike Lee’s film Do the Right Thing.   More recently, Steel Pulse announced their new album in October 2018, titled:  Mass Manipulation.  The debut single, Stop You Coming and Come, was released a couple of months later in December.

Steel Pulse got started at roughly 11pm, and were greeted by a raucous roar from Ft. Lauderdale’s sold out Culture Room.  One by one, each band member walked on to the stage and reported to their respective musical instrument location.  Last to enter, was none other than the veteran lead vocalist, David Hinds, who wasted no time in giving the packed house the moment they were yearning for—the delivery of Steel Pulse’s smash hit, Chant a Psalm a Day.  Most everyone closed their eyes and chanted along with David Hinds as loudly as they could.   Soon thereafter, the saxophone intro was the perfect segueway into the magnificent tribute to Marcus Mosiah Garvey and highly influential hit—Rally Round (…the Red, Gold, Black, and Green).   At that moment, the volume of the densely packed audience then climbed to yet another decibel level as they passionately sang along with David Hinds, who seemingly had the venue in the palm of his hands.

After all was said and done, the globally known and much talked about musical ensemble known as Steel Pulse certainly treated their fans at the Culture Room to an epic jam rockin’ roots reggae  performance that will always be remembered by those who were fortunate enough to attend and be in the band’s presence.  And in saying that, maximum respect goes out to the Steel Pulse members who put on such an amazing show:  David ‘Dread’ Hinds (rhythm guitarist and lead vocalist); Selwyn ‘Bumbo’ Brown (on keys/vocals); Sidney ‘Predator’ Mills (also on keys/backup vocals); Amlak ‘AmBASSador’ Tafari (on bass); Wayne ‘CeeSharp (C#)’ Clarke (on drums); David ‘Electric’ Elecciri (lead guitarist/vocalist and music producer); and Jerry “Saxman” Johnson (on saxophone).

Featured photo taken by Nick Ford, who lives and works in South Florida.