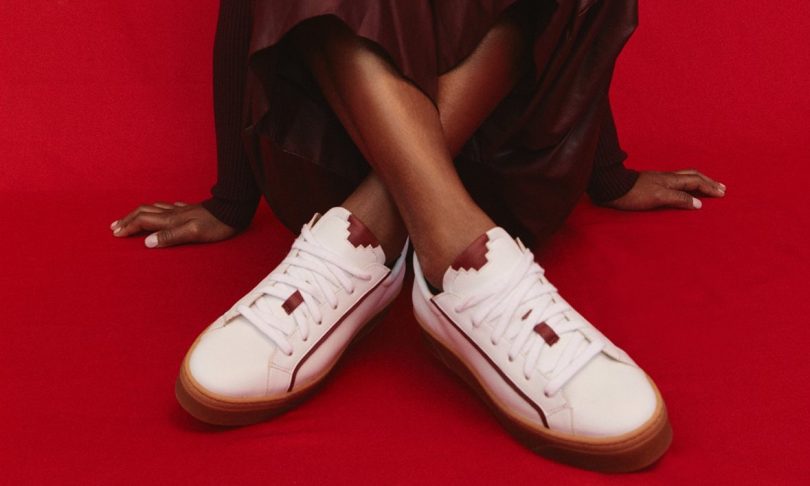 Sylven New York has expanded its luxury shoe line with The Mel, the first vegan sneaker. To mark The Mel’s launch, Sylven partnered with Chrissy Tracey, a Jamaican American actor and advocate of sustainability who has also been named as the first vegan chef to work with Bon Appétit Magazine. Tracey is “the face” of the shoe’s launch and has created a custom vegan recipe that features the two chief materials used in the shoe: apple and coconut.

The shoe, which is made of apple leather, coconut husks, and a natural rubber sole, was introduced on Earth Day, April 22, 2021, as an example of the brand’s total commitment to offering vegan and responsible leather styles and moving to using only vegan and plant-based materials by the end of 2021. According to Sylven, The Mel is handmade in Italy using a mix of “bio-based, renewable, recyclable, organic, and biodegradable materials.”

According to Dworkin, Sylven New York could not have chosen a better partner than Tracey. The vegan chef will reinforce the company’s focus on veganism, sustainability, and its ethos of taking the cause seriously “without taking yourself too seriously.”

Starting at $275 a pair, Sylven’s new shoe line reflects a shift toward veganism that follows that of its founder and creative director’s personal journey to sustainability via ascribing to veganism herself. The Mel was introduced to the public on the birthday of Sylven founder Casey Dworkin, a date that coincides with Earth Day.

Tracey was brought into the mainstream food media outlet Bon Appetit as the company sought to improve the diversity of its staff and content. Tracey, as a Black, female, vegan recipe developer and independent business owner, is charged with introducing vegan cuisine to the masses. Tracey has said she doesn’t want to be part of a trend: “I want to be part of a revolution,” she said, and hopes that with the large platform of the mainstream food magazine she will be able to encourage people to eat healthier, plant-based food. Vegan Vibes, her meal delivery firm, donates meals to families facing food insecurity in Connecticut and also hopes that Bon Appetit will bring more attention to similar initiatives.

Tracey learned to cook through her family’s Jamaican-style traditions. She said she also learned a lot about cooking from her best friend’s mother who was from Argentina. Tracey was raised as a vegetarian as one of eight children. She did not want to go to culinary school because she would have had to cook meat there, so she studied business and technology instead. She has participated in lessons at the Food Future Institute under Matthew Kenney, a plant-based chef and restaurateur.