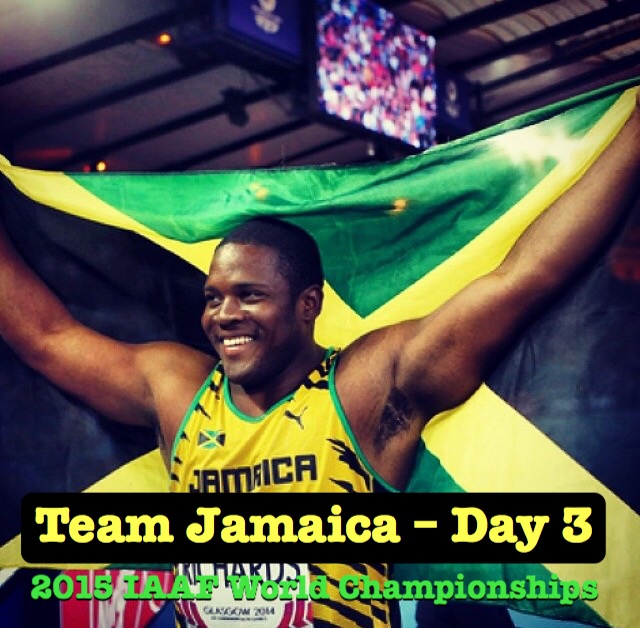 The afternoon session of day 3 saw success for Team Jamaica with Kaliese Spencer and Janieve Russel both qualifying for the final of the women’s 400 meter hurdles after finishing as the runner-up in their respective heats, the final of this event will be included into action during day 4. Women’s triple jump finalists Kimberly Williams and Shanieka Thomas were unable to add to Team Jamaica’s medal count after finishing 5th and 11th. Next, the women’s 100m semi-final featured four Jamaicans of which three were able to advance to the final. Shelly-Ann Fraser-Pryce, Natasha Morrison and Veronica Campbell-Brown all fought for their spots to take place in the 100m final, while Sherone Simpson came up just short during heat one after Fraser-Pryce topped the heat. The men’s 400m final will not feature a Jamaican athlete as Peter Matthews (8th, heat 1), Rusheen McDonald (6th, heat 2) and Javon Francis (4th, heat 3) were unable to wedge their ways past the semi-final. Lastly, the final event of the day featured Fraser-Pryce, Campbell-Brown and Morrison as part of the women’s 100m final with Shelly-Ann Fraser-Pryce making sure Usain Bolt will not be the only Jamaican collecting a gold medal in Beijing. However, Veronica Campbell-Brown (4th) and Natasha Morrison (7th) will not be receiving medals in the event. Jamaica currently sit 2nd in the medal table behind Kenya after dominating the men’s and women’s 100m, allocating two gold medals in each. O’Dayne Richards holds the other lone medal for Team Jamaica, which is bronze. Day 4 will begin in the afternoon as there is no morning session.