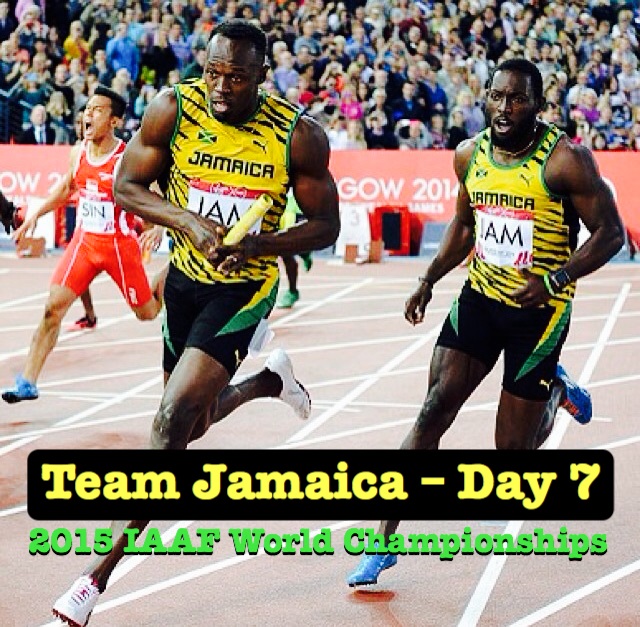 Day 7 was limited in action for Team Jamaica but was very successful even without any Jamaicans competing in the morning session. So, beginning with the afternoon session, the women’s 100m hurdles semi-final featured Danielle Williams, Kimberly Laing and Shermaine Williams. Danielle and Shermaine were able to qualify for the final while Laing was unable to. The next event Team Jamaica participated in was the women’s 200m final in which three Jamaicans competed in. Elaine Thompson placed in 2nd and brought home silver for her country while Veronica Campbell-Brown finished right behind Thompson and received the bronze medal. The only dark spot was Sherone Simpson finishing in the final spot (8th) after impressing in the previous rounds. The men’s 110m hurdles was the next event set to take place and featured Jamaicans Omar McLeoud and Hansle Parchment. While McLeoud (6th) was unable to finish in the top three and bring home a medal his countryman, Parchment, did have a good enough showing to take home a silver medal for Team Jamaica. Lastly, the final event of the day saw more medals for the Jamaicans in Beijing by way of the women’s 200m hurdles where Danielle Williams was able to collect another gold medal for her country. Fellow Jamaican Shermaine Williams was only able to finish 7th. However, all in all, Team Jamaica had a very successful day in Beijing and will be looking forward to collecting more medals with only a couple days left. Even after a successful day, the Jamaicans continue to sit in 3rd place in both the medal and placing tables with Kenya and the United States above.