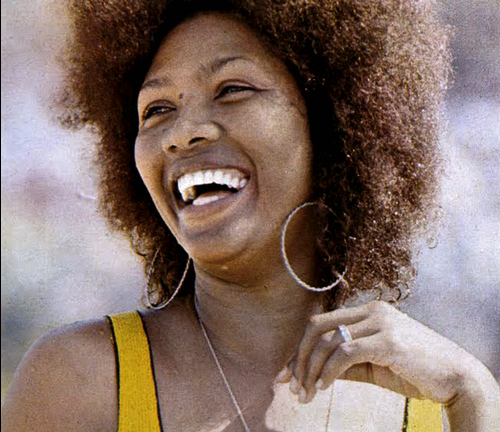 Jamaica’s Rock Steady was heavily influenced by American R&B and Soul. Both R&B and Soul music had a lot of female groups, like the Supremes and Gladys Knight and the Pips, male and female combination duets such as Marvin Gaye and Tammy Terrell and female solo singers like Betty Wright, Aretha Franklin, and Dionne Warwick. Rock Steady like Ska had male and female duets. The top female vocalists of the era were Millicent ‘Patsy’ Todd, Marcia Griffiths, Joya Landis, Norma Fraser, Cynthia Richards, Rita Anderson Marley, Dawn Penn and Ms. Rock Steady herself, Phyllis Dillon. The female presence with solo singers and groups increased in the rock Steady era.  The top female vocalists and groups of the era were:

Millicent ‘Patsy’ Todd’s biggest hit ‘Housewife’s Choice’ was a duet with Derrick Morgan and during the Ska era. However she had many other hit duets w/Stranger Cole. Her music catalogue include; ‘Down by the Train Line’ ‘It’s so Hard Without You’, ‘Don’t Want to Be Hurt’, ‘Come Back’, Tell It To Me”, Pata, Pata Rocksteady’, ‘A Man Is Two Faced’ ‘Retreat Song’ ‘Patsy Little Flea’ and ‘Your Photograph.’ Fed up with not receiving royalty payments Todd retired from singing and performing and moved to New York City in the late 1960’s. She currently resides in Florida.


Marcia Griffiths Order of Distinction O.D. (Commander Class) Her enduring 50 year career spanning every era of modern Jamaican music earned her the title “Queen of Reggae”. Griffiths singing career began in 1964 at Studio One Records. Marcia has had success as hit maker as both a solo singer and duets with male singers. Her included ‘You’re Mine’,w/Tony Gregory, ‘Always Together’, and ’Got to Get Ourselves Together’ w/Bob Andy, ‘Oh My Darling’, w/Bob Marley and ‘Words’ w/Jeff Dixon aka Free I. Dixon, had a had a successful career in radio and music. He was the manager of the popular R&B group ‘Slave’ (Just a Touch of Love) was murdered along with reggae singer Peter Tosh. He was a popular radio disc jockey at the Jamaica Broadcasting Corporation (JBC) Radio station in Jamaica and (WNJR) in New Jersey and (WNOV) Milwaukie.

Marcia first solo local hit was ‘Feel like Jumping’ in1968 followed by ‘Truly’ and ‘Melody Life’. Marcia via her duets with legendary singer/songwriter Bob Andy, had two international hit songs ‘Young Gifted and Black,(released in1969) peaked at #5 UK hit single in 1970, and ‘Pied Piper’ which peaked at #11 in the UK Singles Chart in 1971. In1989 Marcia’ version of the Bunny Wailer single ‘Electric Boogie’ (1976) became her most successful single peaked at # 51 on the US Billboard Hot 100. ‘Electric Boogie’ remains the highest-selling single by a female reggae singer of all time. The song also’ created the international dance craze the “Electric Slide”. She currently lives in Florida.


Joya Landis is an American based singer who recorded an early Rock Steady version of ‘Angel of the Morning’ in 1968. The Jamaican single (Treasure Isle label). The UK single featured ‘Love Letters’ by Phyllis Dillon & Alton Ellis on the B-side.

Landis had a small catalogue rock steady songs on the Treasure Isle label including ‘Kansas City’, ‘Moonlight Lover ‘When the Lights Are Low, ‘Joy in the Morning’, ‘Out The Light’ (1968) ‘I Love You True’, ‘I’ll Be Lonely’ w/ John Holt, ‘Love Letters’, ‘Your Love Is All Over Me’ and ‘Let Me Know.’

Norma Fraser career began the early 1960’s. Her first “We’ll be Lovers”, w/Lord Creator, (1961). In1965 her hit ‘Heart Aches’ was Number One on the charts for more than a year in Jamaica. Her solo hits, with Studio One included ‘Heartaches’, ‘Respect’, ‘Time’ and ‘Come By Here.’ The success of ‘First Cut’ earned Fraser the best Female Newcomer in 1967 music award in Jamaica. Her catalogue include ‘The Ten Commandments of a Woman’, ‘Give Me Right’, and ‘Respect’ and ‘Working.’ Fraser  migrated to the USA in 1970 and soon found work as a featured performer at a benefit gig that demonstrated solidarity with the US congresswoman Bella Abzug.

Cynthia Richards song “Foolish Fool”, a major hit for her in Jamaica. ‘It was also released in the UK, where it bubbled under the pop chart. The lack of financial reward for her recordings led her in1970 concentrate on her singing career as the lead singer with the band Skin Flesh and Bones at the Tit-For-Tat club in Kingston. She returned and recorded ‘Clean Up Woman’, ‘Sentimental Reasons’ and ‘Aily I’, which became a smash UK hit on the Attack label in 1972. 1973, she enjoyed a hit with the Staple Singers’ ‘If You’re Ready (Come Go with Me)’. She was voted Top Female Artist of 1973. Her catalogue include If You Are Ready Come Go With Me’ ‘Forever’ ,‘ Conversation’, ‘Mr. Postman’, ‘Love and Unity’ , Place In My Heart (GG) Records ‘Jungle Fever’, ‘I`m Moving On’, ‘I Can’t Wait  ‘Sentimental Reason’, and ‘Aily.


Hortense Ellis aka (Mahalia Saunders and Queen Tiney) began touring Jamaica 1960 with Byron Lee and The Dragonaires. She also began recording with some of the island’s top producers. She recorded “Right on the Tip of My Tongue” and “Piece of My Heart” under the pseudonyms Mahalia Saunders and “Down Town Ting” for producer Bunny “Striker” Lee as Queen Tiney.  Her 1970 single “Unexpected Places” was a big hit in Jamaica and also in Britain (Hawkeye label).  Ellis’ catalogue included “I Shall Sing”, “Hell and Sorrow” and “Brown Girl in the Ring”, “Twelve Minutes To Go”, “I’ll Come Softly” ,‘Just a Girl’, ‘I Shall Sing’, ‘With All My Heart’ and ‘Somebody Help Me’ w/ Busters All Stars.

Hortense teamed up with her brother Alton Ellis on the album ‘Alton & Hortense’ (Studio One) Ellis moved to New York City and Miami before returning to Kingston, Jamaica where she died in October 2000 from a stomach infection. https://www.youtube.com/watch?v=kJCELGBklm8– ‘I’m Just A Girl’


Nora Dean is a former member of the Soulettes also recorded as a member of the Ebony Sisters before recording as a solo artist. She focused many of her songs on sex. Her career spans Rocksteady, Reggae and Gospel. Dean Catalogue included; “The Same Thing That You Gave to Daddy” (1969) Dean had her first hit in 1970 for producer Byron Smith with “Barbwire.” Her other hits ‘Mojo Girl’ ‘Wreck A Buddy’ ’The Same Thing You Gave Daddy’ (Lee Perry) ‘Iam the Same Woman’ ‘Angle Lala’ or ‘Aye Ay’, ’Peace Begin Within’ ,‘Eddie My Love’ ‘Love of a Boy’, ‘Greedy Boy.’ She recorded “Night Food Reggae” (Sonia Pottinger), (“Let Me Tell You Boy“) (Harry Mudie), “Que Sera Sera”, retitled “Kay Sarah (Bunny Lee). Dean moved to New York City in the mid-1970 where she married. She is now concentrating on gospel music.


Doreen Shafer– She’s one of the great female voices from Jamaica. From 1964 -1994 she worked and performed live with the Skatalites band. She appeared on Album ‘Rude Girls ‘Try a Little Smile’, ‘This Love’ ‘I am Gonna Change My Mind’ (Studio One Archives – Volume 7 Still in Love/w Alton Ellis’ ‘You are wondering Now’ w/Skatalites.’ https://www.youtube.com/watch?v=nOx_X-lawbY&list=PLj8Msv_IVIaLBBISyh-v4qIPxlD5jrmTW&index=12-  ‘I Don’t Know Why.’


Julianne- (Judy Mowatt) recorded under several other aliases. She scored her second hit in 1974 with a reggae cover version of South African legend Miriam Makeba’s “I Shall Sing.’ Mowatt’s hits song in the rock steady era were produced by Sonia Pottinger, on the Gayfeet Label including ‘I Shall Sing’,‘ I am Alone’(Julianne) ,‘ Silent River Runs Deep’w/ Gaylettes, ‘I Love You’ w/Alton Ellis, ‘Emergency Call’, ‘Too Good for Me’ Way Over Yonder’ and  ‘Son of a Preacher Man’ w/ The- Gaylettes


Alpharita Constantia “Rita” Marley Order of Distinction was born 25 July 1946 in Santiago de Cuba, Cuba. . She is the widow of Bob Marley. Abandoned by her mother when she was just 5 years old she was raised her father and an aunt in the neighborhood of Trench Town, Jamaica. In the mid-1960s Rita was a member of the vocal group the Soulettes. Bob Marley became the group’s mentor and manager and through working together, he and Rita fell in love. Later, she, along with Marcia Griffiths and Judy Mowatt became the I Threes the backing vocalists for Bob Marley and the Wailers. Rita Marley, ‘Pied Piper’,’ Play Play Play’ “Friends and Lovers’/Wailing Wailers’ and ‘It’s Alright’ (Studio One Archives – Volume 7)

Jennifer Lara– recorded her rock steady debut album at Studio One titled Studio One Presents Jennifer Lara. It was an instant success. Lara hit with the single ‘Where Have All The Good Men Gone. The success of Lara’s Studio One output overshadowed her later work, although she enjoyed minor hits with ‘All My Love for You’ and ‘Mark My Words’. Her career continued into 80s as she had recorded with producers Prince Far I, Henry ‘Junjo’ Lawes and Triston Palma. She had a duet w/Palma ‘Midnight Confession’. Into the 90s she recorded with King Jammy.              Jennifer Lara catalogue at Studio One included: ‘I Am Ready’w/ Freddie McGregor’s “My Man’’, ‘I Am In Love’, ‘A Change is Gonna Come’ , ‘Across the Line’ ,‘Tell Me Where’ , ‘Sukiyaki’, (Studio One Archives/Volume 7)‘Consider Me Jah Jah’ ( Studio One Archives/Volume 31) and ‘One Day at a Time’ (Studio One Archives – Volume 23) She died in June 2005 from an apparent brain hemorrhage and high blood pressure.


Marlene Webber came from a musical family and initially performed alongside her sister Joyce as half of the Webber Sisters. Her solo career. She was also part of the group the Webber. She had a hit in Jamaica in 1976 with a cover of Cat Stevens’ “The First Cut Is the Deepest”. The single proved a success, and her debut album was released.

Marlene catalogue on Studio One included “No Happiness”, “Stand by Your Man” (a cover of the country hit by Tammy Wynette), and “Hard Life”. Her solo catalogue include the singles she released: ‘My Baby’’,‘Sha La La’ , ‘Dream Dream’ ‘Hard Life’, ‘ How Nice it is’ ,You made A Vow’’,‘ Natengula’ ,‘I am Gonna Love’, ‘Maybe Next Time’, ‘ What Good am I’ ,‘As Long as You Love Me’, ‘No More Running Around’, ‘Cumbaya’, ‘Letter to Mommy and Daddy’, ‘Once You Hit the Road ‘I Am Sorry’, and ‘Heaven Can Wait.’   The First Cut Is the Deepest, He’ll Have to Stay, What Good Am I, Forget the Past,  Born to Love, Cheating Is, Guess Who, Right Track, and ‘Never Let Go. Her album ‘Merlene Webber Greatest Hits’ are available on ITunes.


Myrna Hague– Hague’s career began in the mid-1960s.She performed at jazz venues in London and recorded for Studio One, notably the Melody Life album.[2] Melody Life included some of her most popular singles, including the title track, “How Could I Live”, and “First Cut Is The Deepest”. Other songs include [‘Time After Time’ (Studio One Archives – Volume 5) ‘What about You’ (Studio One Archives – Volume 5) 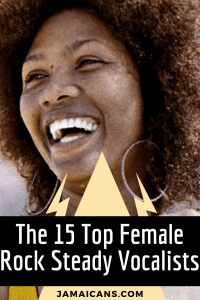