Kemar Christopher “Ding Dong” Dwaine Ottey is a dancer, singer, songwriter, dancehall reggae artist, and founder of the Ravers Clavers dancing syndicate. Born at Jubilee Hospital in Kingston, Jamaica, on September 29, 1980, he is the son of Denise Bennett and Ferdinand Ottey. His father gave him the nickname Ding Dong and he was also known affectionately as Alla Ding. His father took him from his mother and died when Ding Dong was just three years old. He was raised by his grandmother and aunt and helped the family financially by selling empty alcohol bottles. The artist launched a dancing career before expanding his talents to become a DJ and recording artist. Most well-known for “Bad Man” in 2005 and “Fling” and “Genna Bounce” in 2017, all three found favor with a worldwide audience.

Ding Dong joined the Flatbush Dance crew and became a household name globally in the world of dance. He’s created and pioneered a variety of dances that includes Chakka Chakka, Dip Again, and Part Di Crowd. His music career flourished and he’s the host of the documentary “It’s all about Dance.” Ding Dong performed musically around the world and was the first dancer to dancehall artist ever billed on Rebel Salute 2018. He became the voice of the Flava with a Beat advertising campaign launched by Grace Foods and the “Flairy” became the campaign’s official dance. He’s also represented Magnum Tonic Wine, GraceKennedy, and Western Sports brands. The artist also appeared on the BBC 1Xtra with Seani B. 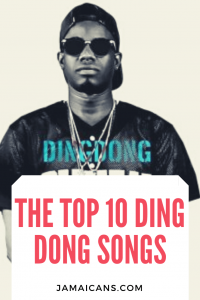