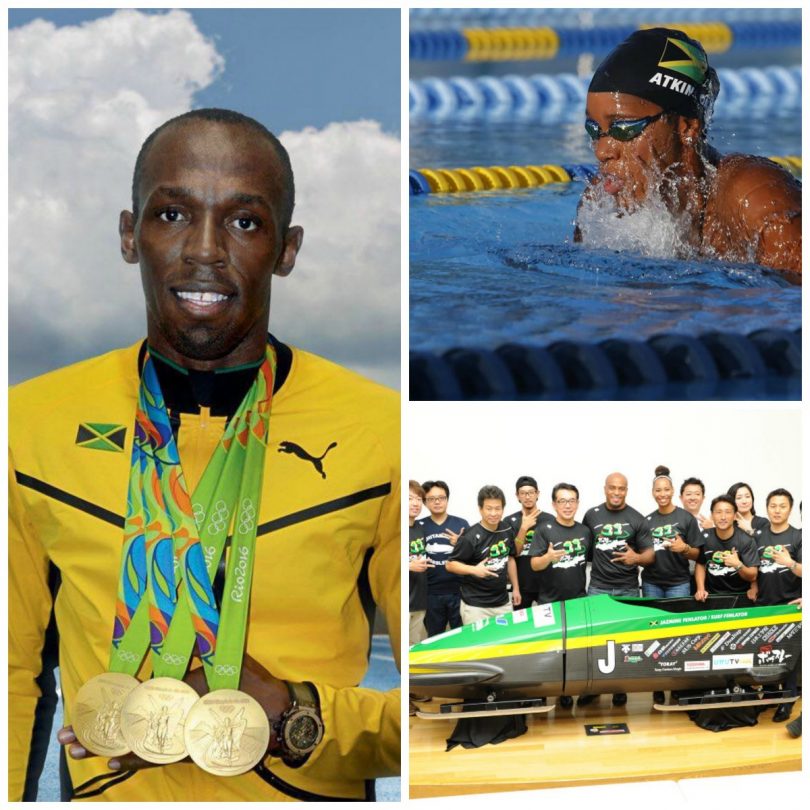 Jamaica’s year in sports was marked by the spectacular performances and achievements of its athletes at the 2016 staging of the Olympic Games in Rio. Usain Bolt achieved a history-making “triple” gold medal win, while the other Jamaican Olympians turned in stellar performances as well. Calabar High School made history when it became the first high school on the island to have its own synthetic track. Jamaica’s bobsled team received a new sled courtesy of Japanese donors, while Racers Grand Prix garnered significant financial support from the Jamaican government. Jamaica won the Overall Team Title at the Cotecc Grand Slam Tennis Championships, and the Jamaican swim team won an impressive 46 medals at the Caribbean Swimming Championships. Jamaica’s Alia Atkinson broke the world record in the 50-meter breaststroke at the FINA World Cup.

CALABAR HIGH SCHOOL MADE SPORTING HISTORY
Calabar High School made history by being the first high school in Jamaica to have its own synthetic track. Calabar is the defending Inter-Secondary Schools Sports Association (ISSA) boys’ track and field champion. The new track opened officially one day before the school’s hosting of the McKenley/Wint Track and Field Classics. According to Albert Corcho, the school’s principal, Portia Simpson Miller, the country’s Prime Minister officiated at the official opening. The track meet was named in honor of two past students at the school who made significant contributions to track and field, both for Calabar and Jamaica. The track is the site for seven developmental meets on the calendar of the Jamaica Administrative Athletics Association (JAAA), including the 100m, 400m, 1500m, sprint and intermediate hurdles events.

JAMAICAN BOBSLED TEAM RECEIVED NEW SLEIGH FROM JAPAN
Japanese donors provided Jamaica’s 2018 Olympic bobsled team with a new bobsleigh to help the team get a spot in the international competition. When their home country’s federation rejected the Japan-made bobsleigh – their team uses sleds made in Germany – a group of small factories in Tokyo offered the “Shitamachi Bobsleigh” to Jamaica. Chris Stokes, president of the Jamaican Bobsleigh Federation, was confident about Jamaican athletes winning in the 2018 Olympics with the Japanese sled. The sled represented the pooled skill and effort of some 100 factories in Japan, and these companies are still working with Jamaica’s team to fine-tune the equipment in time for the Olympic qualifying campaign.

RACERS GRAND PRIX RECEIVED US$150,000 FROM JAMAICAN GOVERNMENT
The Sports Development Fund (SDF) of the Jamaican government provided US$150,000 toward the inaugural Racers Grand Prix on June 11, 2016. Olivia “Babsy” Grange, Jamaica’s Sports Minister, said the government contributed toward the more than $100 million budget of the Grand
Prix for staging the event, which is organized by the Racers Track Club. The club is headed by Glen Mills and is the home of Olympian Usain Bolt. Grange said that while the government’s funding may not have covered all expenses, it showed that Jamaica is “center stage” in track and field and that the country can to host a meet of this size and significance with internationally known athletes.

41 MEMBERS OF JAMAICA TEAM WERE FIRST-TIME OLYMPIC COMPETITORS
The 2016 Olympics in Rio was the first Olympic competitions for 41 members of Jamaica’s track and field team. At least 18 of these made their first appearance on a senior international team. The 2016 Jamaican team was the largest ever named by the Jamaica Athletics Administrative Association; 59 athletes represented the island at the games. This is the first time Jamaica had female discus throwers at the Olympics. There were also several high-profile first-timers: Elaine Thompson, who won a silver medal at the 200-meter World Championships; Omar McLeod, world-leading 100-meter hurdler; Janieve Russell who was the top Jamaica 400-meter hurdler this year; Stephenie-Ann McPherson and Shericka Jackson for the quarter-mile runs; and World Championship bronze medal winner in the shot put, O’Dayne Richards.

JAMAICA WON OVERALL TEAM TITLE AT COTECC GRAND SLAM TENNIS CHAMPIONSHIPS
The Jamaican team won the overall Under-12 team title at the 2016 Caribbean and Central America Trans Confederation (COTECC) Grand Slam Development Tennis Team Championships held in Curacao in August. The boys’ teams defeated Trinidad and Tobago and Aruba to win first place in their section. The girls’ team also defeated T&T in their section to take the top spot. Because they finished in the top three in both boys’ and girls’ events, the Jamaicans qualified for the masters championship team events, which were held in Mexico in November. The members of the winning teams included Keyondre Clarke, Selena Bird, Daniel Azar and Abigail Perdue.

JAMAICANS BOLT AND THOMPSON HONORED BY NACAC
The North American, Central American and Caribbean Athletics Association (NACAC) selected Jamaicans Usain Bolt and Elaine Thompson as its 2016 Athletes of the Year. Bolt, who won the Male Athlete of the Year award, achieved triple gold-medal status at the 2016 Rio Olympics, bringing his all-time Olympic gold medal total to nine. Thompson, who won the Female Athlete of the Year award, claimed bronze medal at the 2016 World Indoor Championships in Portland, Oregon, in the women’s 60-meter dash, but her performance at the Rio Games was the factor that earned her the NACAC title. She won the women’s 100-meter final, the women’s 200-meter, and ran the second leg to help her team win silver in the women’s 4×100-meters. 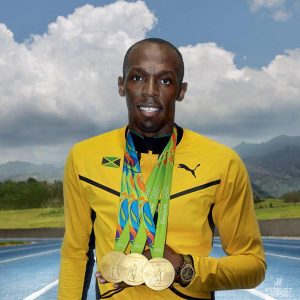 Usain Bolt to Get Statue at the Jamaican National Stadium.

Jamaica’s Usain Bolt made Olympic and personal history when he won three gold medals for the third Olympics in a row. He won the 100 and 200-meter races and the 4×100-meter relay. Bolt achieved triple gold-medal status at the 2016 Rio Olympics, bringing his all-time Olympic gold medal total to nine.

JAMAICA’S IMPRESSIVE PERFORMANCE: 46 MEDALS AT CARIBBEAN SWIMMING CHAMPIONSHIPS
Jamaican swimmers finished their competitions at the 21st staging of the Caribbean Island Swimming Championships (CISC) by winning 14 medals on the last day. The swimmers’ medal total at the competition, which was held at the Betty Kelly-Kenning Aquatic Center in the Bahamas, was 46, which included 14 gold medals, 20 silver, and 12 bronze. The total far surpassed the expected 29 medals predicted at the start of the championships. Gold medal winners included Timothy Wynter, who won the first gold medal for Jamaica on the first day of the competition in the Boys’ 18 and over 50 meter backstroke, Britney Williams in the Girls’ 13-14 400 meter freestyle, Emily MacDonald in the Girls’ 11-12 age group; in the 50 meter freestyle, Breanna Roman in the Girls’ 18 and over 100 meter breaststroke, and Keanan Dols in the Boys’ 15-17 200 meter backstroke.

63 JAMAICAN ATHLETES WENT TO RIO OLYMPICS
A total of 63 Jamaican athletes traveled to Rio de Janeiro to participate in the 31st Olympic Games, which are scheduled from August 5 to August 21, 2016. The total included 34 women and 29 men, and 44 who made their first Olympic appearances. Jamaica’s representation included Olympic champion Usain Bolt, who defended his titles in the 100 meter, 200 meter and 4×100 meter relays. Women’s champion Shelly-Ann Fraser-Price sought unprecedented third win in the 100-meter Olympic distance. Alia Atkinson and Timothy Wynter represented Jamaica in the 100-meter breaststroke and backstroke, respectively, and Yona Knight-Wisdom competed in the 3-meter springboard diving event. The Jamaican delegation also included 26 administrative and medical officers and coaches, with Vishwanaught Tolan as the Chef de Mission. 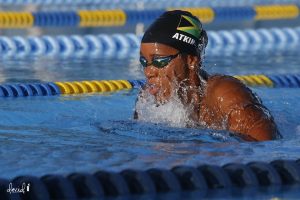 Alia Atkinson, champion swimmer from Jamaica, broke the world record in the 50-meter breaststroke short course at the FINA World Cup competition in Tokyo with a time of 28.64 seconds, 0.16 seconds faster than the previous record set in 2009 by American Jessica Hardy in Berlin. Atkinson defeated Yulia Efimova of Russia and Molly Hannis of the United States while achieving the record time. This was the second world record for Atkinson, who is currently tied with Ruta Meilutyte of Lithuania for the 100-meter breaststroke record. FINA awarded Atkinson a US$10,000 bonus for breaking the record, plus 20 points toward her cluster bonus. Atkinson was one of just three women in history to have broken the 29-second barrier in the 50-meter breaststroke.