The Mighty Diamonds is a harmony trio from Jamaica comprised of lead vocalist Donald “Tabby” Shaw, Fitzroy “Bunny” Simpson, and Lloyd “Judge” Ferguson, specializing in reggae that features Rastafarian influences. They were school friends in the 1960s and formed the group in 1969 in Trenchtown, Jamaica. Originally formed under the name of The Limelight, they rebranded themselves as the Mighty Diamonds when Shaw’s mother began calling them “the diamonds.” They based their choreographed stage shows on Motown groups of the time that also highlighted smooth and harmonious vocals. They recorded a number of songs, but didn’t have their first hit single until 1973 with “Shame and Pride.” The Mighty Diamonds truly attained status as one of the top Jamaican groups of all time after working with producer Joseph Hoo Kim in the 1970s.

The Mighty Diamonds proved to be one of the most popular of the reggae groups to emerge from the era. Their music featured tight songwriting with many of the lyrics created by the group members. They were signed by Virgin Records and released the album “Right Time,” which made them an international hit. In response, Virgin Records sent the group to New Orleans to create the “Ice and Fire” album, but the production failed to appeal to the trio’s reggae fans and didn’t do well. They continued to release multiple hit singles under the Channel One label, along with their own Bad Gong label. The group’s music became popular in clubs throughout Jamaica, London, and New York, especially “Pass the Kouchie.” The achieved international fame for the second time when it was retitled “Pass the Dutchie.” The group performed at Reggae Sunsplash in 1982. During their long and illustrious career, the trio produced a total of 64 studio albums, collaborations and split albums, and compilations, along with five live albums.

12. Why Me Black Brother Why 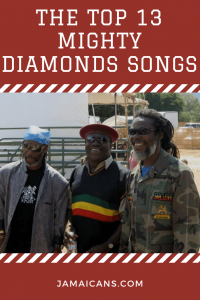