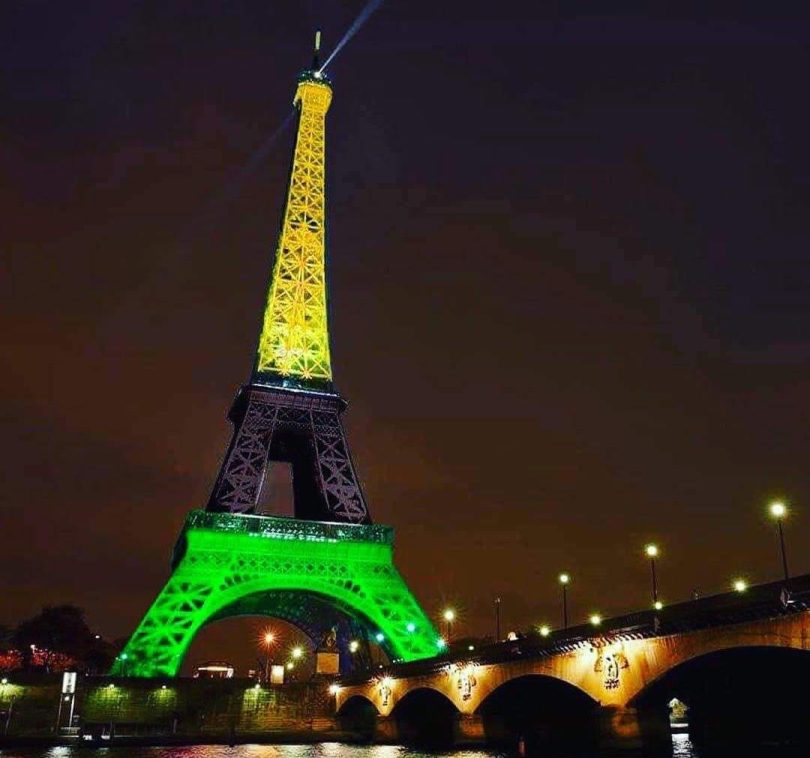 A photograph showing the Eiffel Tower in Paris lit up with the colors of the Jamaican flag has been making the rounds on social media for the past two weeks. Many posters claim the iconic tower is displaying Jamaican colors in celebration of Jamaica’s 60th anniversary of independence. Others say the image is a fake, while others believe it is real.

The team at Jamaicans.com investigated the issue and reached out to Jamaican organizations in Paris. What we found is that the image has been photoshopped to display the colors of the Jamaican flag. The photo is not new, having first appeared to celebrate the victory of Jamaica’s eight-time Olympic champion Usain Bolt in one of his many Diamond League events. It was shared again on social media when Jamaica’s national football team, the Reggae Girlz, qualified for the World Cup held in France in 2019.

The website for the Eiffel Tower lists tributes that have been marked by lighting up the tower, but there is no record of any tribute involving Jamaica or the Jamaican flag. Additionally, no major French or Jamaican media outlets have reported on any current tribute at the Eiffel Tower to Jamaica.

So as much as we would love to report this was a “real” tribute, all indications are that the image circulating on social media is a well-done photoshop of the Eiffel Tower bathed in the colors of Jamaica’s flag.

However, while this image may be faked, we have reported that the spectacular natural wonder of Niagara Falls on the border of New York State and the Canadian province of Ontario will be lit up in Jamaica’s colors of black, green, and gold in celebration of Jamaica 60 on August 6, 2022, the 60th anniversary of Jamaica’s independence.

The lighting of Niagara Falls was officially announced by Olive Grange, Jamaica’s Minister of Culture, Gender, Entertainment, and Sport early in 2022. The lighting will be part of the months-long celebration of the 60th anniversary.

Niagara Falls is one of the most famous natural attractions in the world. The falls actually comprise three waterfalls that have a vertical drop of more than 160 feet. Over 5.9 million cubic feet of water goes over the crest of the falls every minute.