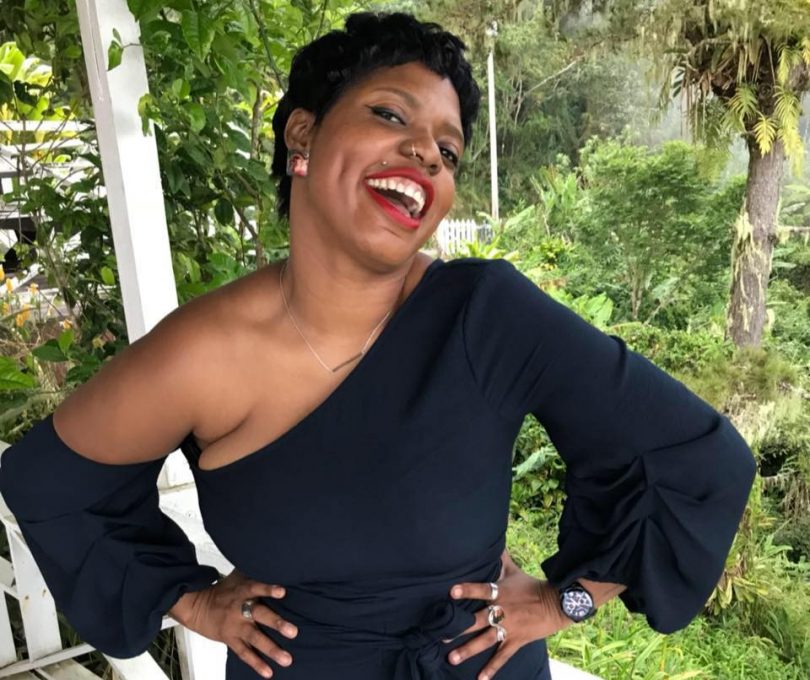 Vogue Magazine has published a feature article on Jamaican multimedia artist Ebony G. Patterson, describing her new exhibition in which fashion plays a major role. Patterson’s new solo exhibit is entitled “While the Dew Is Still on the Roses” at the Perez Art Museum in Miami, Florida. According to the Vogue article, visitors find the work lulls them into a false sense of security. At first, it appears to be a serene garden in the moonlight, and as viewers walk through the scene, they find a magical tapestry encrusted with pearls at their feet. The scene includes crochet flowers like peonies and appliqued banana leaves crusted with glitter are on the walls. Colorful topiaries are scattered in the landscape. However, on closer view, this is not an earthly paradise, but a scene in which something ominous lurks. Also scattered in among the lush plants are discarded pieces of clothing the suggest a missing person. There is also a discarded sneaker and what appears to be a headless body in the garden. After seeing what may be dismembered black and brown hands and feet, it is evident the art piece is haunted by a dark spirit. Dangling from the ceiling like vultures are hundreds of women’s shoes that have been dipped in sparkling black paint, and it becomes clear that Patterson is confronting the deaths of black and brown people. Patterson’s pieces are meant to open the most difficult conversations about race and social injustice, and in her latest tableau, fashion and style are significant elements.

According to Christian Louboutin, who was the underwriter of the exhibition, Patterson’s work manages to combine beauty and violence to deliver her powerful messages. Louboutin discovered Patterson through the rapper and producer Swizz Beatz, and as a former landscape architect, he was attracted to the horticultural aspects of Patterson’s work. He commissioned the Jamaican artist to create a tapestry for the window of his store in Miami Beach, which is crowded with flowers and includes the worlds “See Me.”

Patterson divides her time between the Caribbean and the United States and teaches in Lexington, Kentucky. She credits her mother and growing up in Kingston, Jamaica, with her discovery of the self-actualizing power of dress. She said her mother is very confident about her appearance and her attractiveness, which led the artist to see how important style is for black and brown people to claim their identities, particularly in the light of where these kinds of bodies have ended up historically. The way Patterson, 37, dresses also reflects her sense of self-actualization and pride. Patterson designs all the clothing that appears in her art pieces and says she spends a lot of time in fabric stores to find the right textiles. Each piece is custom-made for the model in the tapestry. Patterson works with Jamaican designer Chris Pablo to bring her work to life.