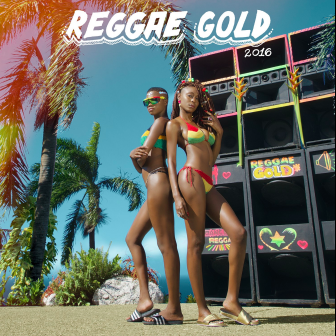 Jamaican music comes in many forms and facets and continues to push boundaries. Reggae Gold 2016 showcases the island’s diverse range – from dancehall and roots reggae to it’s influence in contemporary pop, EDM and Top 40.

Whether it is the #1 Billboard Top 100 single “Cheerleader” from OMI or the club banger “I Know There’s Gonna Be (Good Times)” from super producer Jamie xx featuring Young Thug & Popcaan, the album has no shortage of mainstream appeal.

The compilation also features a heavy dose of dancehall from some of the most in-demand, breaking artists like Tanto Blacks (“Real Rich”), Alkaline (“Champion Boy” and “A Bagga Tings (Radio),”) and Chi Ching Ching (“Way Up N Stay Up” feat. Popcaan & Beenie Man). Following the success of Busy Signal’s Major Lazer collab “Watch Out For This (Bumaye)” (that received over 100 million YouTube views), the dancehall ambassador is back with more fire on “Watch Me Now,” the current theme song to international ad campaigns with LG Smartphone and Smirnoff.  Dancehall’s reigning Queen of the Stage Spice also leads the pack with her latest dance craze “Needle Eye,” which already boasts over 4 million video views.

On a conscious tip, the set opens with the aspirational anthem “My Dream” from rising Jamaican reggae singer Nesbeth and closes with socially enlightening track “The Message” from Bunji Garlin and Damian “Jr. Gong” Marley.

Fans will also get a chance hear some of the new sounds of the summer, including Christopher Martin’s R&B reggae thumper “Under The Influence” and Gyptian’s latest single “Jiggle Jiggle.”

This versatile collection proves that Jamaican music is and will always be impactful, innovative and indestructible.