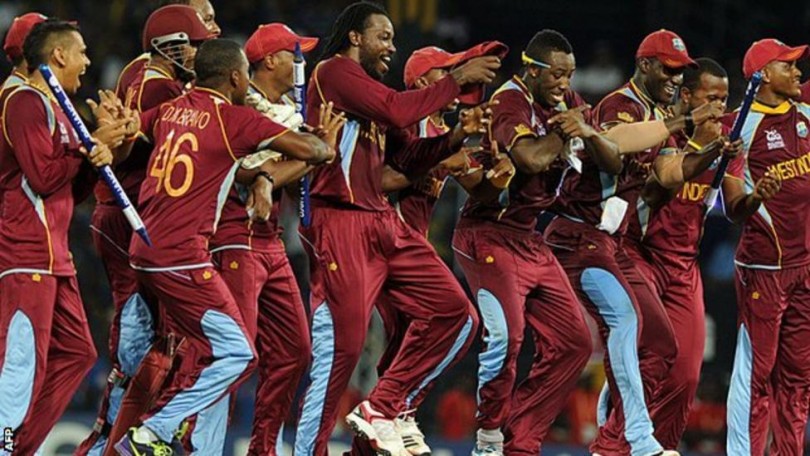 Well, the West Indies Cricket team made it to the Super 10 of the 2016 ICC World Twenty20 Competition currently being held in India! After today’s match we will know if there is hope for the W’Indies to continue to the semi-finals and beyond.

Despite the volatile ups and downs in the performance of our much maligned team, we can still bask in the memories of the thrill of victory when we won the 2012 ICC World Twenty20 in Sri Lanka.

Who can forget when Chris Gayle performed the catchy moves to the Gangnam Style during the matches against Ireland and England? Many of us back in the Caribbean joined the dance party when Gayle led the entire team in a spontaneous rendition of the Gangnam Style as they celebrated their tournament win.

Many Caribbean people got their first look at the Gangnam Style thanks to the exploits of Gayle in the cricket tournament. It was undoubtedly the Internet phenomenon of 2012, as South Korean artiste, PSY captivated the hearts, minds and dance floors of millions of people around the world.

I remember being intrigued about the origins of the dance and doing some research on it back then. According to Wikipedia, Gangnam Style refers to a lifestyle associated with the Gangnam district in the capital city, Seoul, “where people are trendy, hip and exude a certain supposed class”.

With over 2.5 billion hits to date, PSY’s offering was lauded by a South Korean minister for playing an important role in introducing their culture to the rest of the world. UN Secretary-General, Ban Ki-Moon even declared that the song’s feel-good nature could be viewed as a “force for world peace”.

To be honest, I didn’t think people looked cool doing the Gangnam. In fact, Jamaicans have created many dancehall moves over the years that are more visually appealing than Gangham Style. Lyrically, the song is weak; and overall, the video’s message lacks substance. Despite the negatives, I couldn’t get enough of its infectious rhythm for a long time!

Love it or loathe it, Gangnam Style made an indelible mark all around the world. Apart from the fun aspect of the dance, I think there are some valuable lessons to be gained from PSY’s breakthrough effort that can help us to reap business success.

People just want to have fun

Economic hardship is a recurring decimal in most countries of the world, and persons are shell-shocked by their daily financial challenges. With the global issues of war, violence, crime and natural disasters, people are simply tired of the continued diet of bad news. PSY’s hit made us forget our problems for a while, as we smiled with each other and danced together.

Sometimes business owners take themselves and their offerings a little too seriously. Lighten up your marketing message by presenting a happy face to the world; if you make your customers feel good, they will return. This strategy can work even in more formal industries such as medicine or finance – think of how the amusing gecko ads boosted GEICO’s public appeal.

After receiving 500,000 views of the first day of release, Gangnam Style became viral in record time. Thanks to the influence of the Internet, album sales and profits soared; even the share price of the company owned by the artiste’s father doubled during 2012.

While you try to avoid a virus for health reasons, when it comes to business you should seek to infect the world with your offerings. The magic of the internet is open to anyone with a message, so take advantage of this inexpensive method of advertising your business. Even if you don’t achieve Gangnam Style notoriety, the viral possibilities can help to increase your profits.

One hit may be all you need

The Gangnam phenomenon endured for a time and Psy returned with two other dance songs that lit up the Internet. Although he is still trying to capture the eyes of the world, he may never regain the excitement that Gangnam Style brought.  At the very least, he should be able to earn big bucks from his big initial hit to create a healthy nest egg for the future.

Many entrepreneurs dream of owning a business that can sustain profits for decades. However, in this fast-changing 21st century, there are persons who start enterprises strictly for short-term gain. Given the fickleness of today’s consumer, you could look to exploit current trends and earn as much as possible, before reinventing yourself with an entirely new product or service.

Achieving phenomenal returns from your business efforts is not guaranteed. Today’s well-loved enterprise could be tomorrow’s pariah given a different set or circumstances or events. However, if you are enthusiastic about your offerings and broadcast them to the world with Gangnam Style energy, I believe that you will develop a business that’s both fun and financially rewarding.

You can read more about getting started in business in my eBook, The 3 M’s of Money: How to Manage, Multiply and Maintain Your Money.