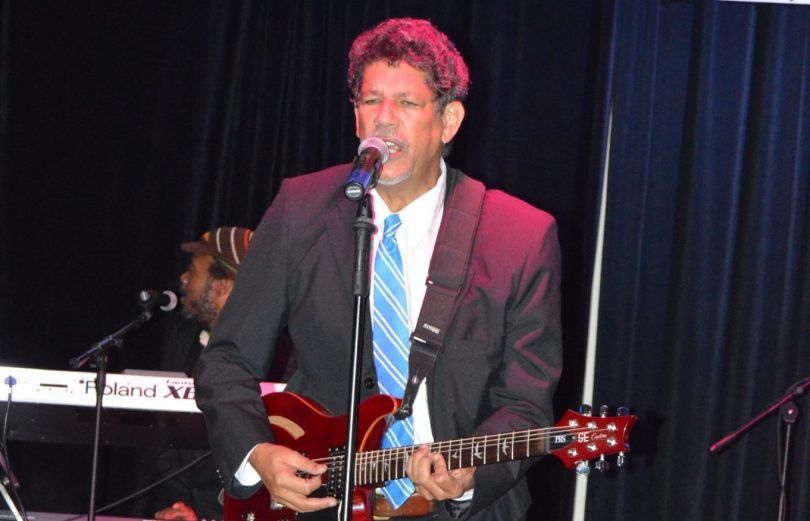 Wayne Armond was a child when Jamaica gained independence from Great Britain on August 6, 1962. Some of his experiences in the immediate post-independence years inspired him to become a musician.
“My fondest memories of Jamaican Independence festivities were the street dances and the float parade.
Just getting bit by the music bug..I was in awe of seeing Desmond Decker and The Aces on  a float..The Jamaicans..The Maytals..The Techniques  on stage at Three Miles (in Kingston) corner in a street dance. These groups were a great influence when we had our own quartet in the ’70’s called T.I.M.E.,” recalled Armond.
Best known as guitarist/singer with the band Chalice, Armond attended St. George’s College, a leading school in Kingston run by Jesuits. Some of the older students there during his time were singer Pluto Shervington and the musician/producer Chung brothers, Mikey and Geoffrey.
Because he was exposed to diverse Jamaican sounds, Armond appreciates quality songs with patriotic themes.
“My first choice of patriotic song would ironically be a Festival Song — Land of my Birth by the great Eric Donaldson..the other is Evening Time which is credited to Barbara Ferland and The Honourable Miss Louise Bennett. This song makes me long for the peace and serenity of Jamaican country living..and how it should be. A simpler time. It reminds me of when Chalice lived in the hills of Gibralta, St. Mary,” he said.
Armond is a co-founder of Chalice which had a number of hit songs during the 1980’s and 1990’s including I Still Love You, Good to be There and Revival Time. He has also toured as a guitarist with Jimmy Cliff and Monty Alexander. He has recorded instrumental covers of Alton Ellis songs he hopes to release as an album soon.
His latest song, credited as Chalice Featuring Wayne Armond, is the self-produced It’s Alright.
https://www.youtube.com/watch?v=BNCwdcKmaUw
Photo Addy Chin