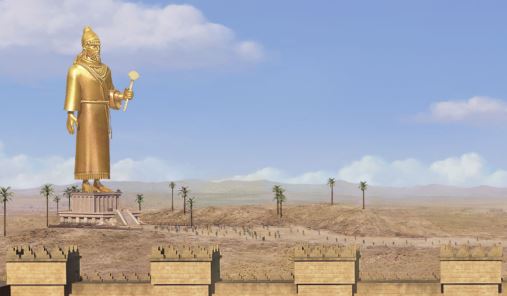 Standing before king Nebuchadnezzar and facing his wrath for their refusal to worship the image according to the instructions heralded to “all peoples, nations, and speakers of every language” (Daniel 3:4, AMP), the three Jewish boys were offered a deal that would spare them being thrown into the burning fiery furnace. To compound the severity of their non-compliance, certain Chaldeans had made the boys’ actions a personal affront to the king by telling him, “These men, O king, pay no attention to you; they do not serve your gods or worship the golden image which you have set up” (v. 12).

There was no ambiguity to the deal: “Now if you are ready, when you hear the sound of . . . all kinds of music, to fall down and worship the image which I have made, very good. But if you do not worship, you shall be thrown at once into the midst of a furnace of blazing fire; and what god is there who can rescue you out of my hands?” (vv. 15, 16). In other words, dance or die. However, Shadrach, Meshach, and Abednego were not intimidated. They knew that this was a bad deal and so “answered the king, ‘O Nebuchadnezzar, we do not need to answer you on this point. If it be so, our God whom we serve is able to rescue us from the furnace of blazing fire, and He will rescue us from your hand, O king. But even if He does not, let it be known to you, O king, that we are not going to serve your gods or worship the golden image that you have set up!'” (vv. 16-18). In other words, no deal! The fiery furnace is nothing for our God to deliver us from, and even if He doesn’t, we will not compromise our beliefs or turn our backs on the God we serve!

What tremendous commitment! One could argue that such commitment is lacking among some professing believers today who time and time again dance to the world’s music and worship various images in an attempt to preserve popularity, relationships, personal ambitions, and other things considered important. Instead of standing firmly for Christ regardless of cost, it is often easier to compromise our beliefs and values. Who wants to be ridiculed? To be ostracized?

What we know is that after being thrown in the furnace, heated seven times more than it was initially, the boys’ faith in God was rewarded and they were delivered (vv. 19-30). Miraculously, “the fire had no effect on their bodies—their hair was not singed, their clothes were not scorched or damaged, even the smell of smoke was not on them” (v.27). God rewarded their faithfulness and their testimony was of such that it transformed the worship practices of the Babylonians (vv. 28-29). We should never discount the power of individuals standing for Christ and what He is able to do in and through them in those difficult circumstances.

Christians everywhere are in somewhat similar positions today. Compromise or be ridiculed? Stand for Christ or be scorned? Oh, lest I forget, we get to choose. We must choose. Deal or no deal? How do you choose?