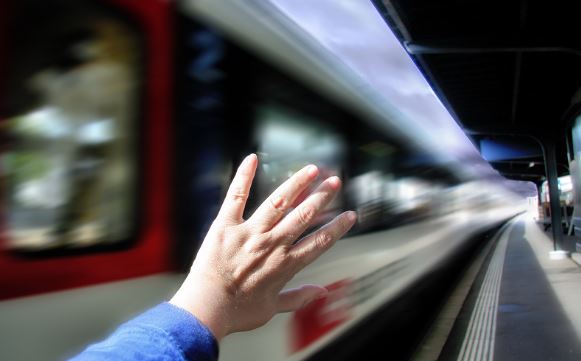 I saw him as he hustled up the stairs to catch the train.  An elderly gentleman, he was moving as fast as he could.  However, as he got up the last of the stairs and only a few steps away from the door of the train, it closed.  Cursing under his breath, he could not believe he had missed it.  We made eye contact at which point I told him the next train would arrive in ten minutes.  After a bit of small talk, I asked him how far he was going.  When he told me, I chuckled and said words to the effect: “In which case you should be thankful you missed that train as it was an express train and would not have stopped at your stop. You need to take the one coming next!”  “Is that right?” he asked with a priceless look of bewilderment on his face. “Yes, sir” I replied. “Your missing the train was a blessing in disguise!” We both laughed.
On the ride home, it occurred to me that what that man thought was a disappointment was in fact to his benefit even though it did not seem that way at the time.  Then the light bulb went off in my mind.  Some of us as Christians are just like him!  How many times have we strived for something only to have the door of opportunity close in our faces?   Unaware of God’s hand in our affairs, guiding our steps as we probably asked Him to, we feel extremely hurt and even feel like God has disappointed us when we “miss our train.”  Yet like a good father, God is constantly watching over His children.  For those who put their trust in Him, He is constantly at work in our day-to-day lives orchestrating events, opening and closing doors, to accomplish His plans and purposes for our lives (see Jeremiah 29:11).
Because we do not always know what is best for us, we have to trust the Lord that He will sometimes step in and disrupt our plans; often times to protect us from ourselves. From our perspective, everything may seem right and in place. Like the man hustling up the stairs, we are convinced in our minds that our courses of actions are right.  However, just as how some of God’s greatest gifts are unanswered prayers, we can include closed doors as well.  What we see as a disappointment — that job or promotion we did not get, that failed relationship, being stuck in traffic, being late for an important appointment, the friend who was not there when we needed them, to name a few – could very well have been a part of God’s providence. If God gave us everything we wanted, some of those things would probably destroy us.  Maybe, over time, one or more of them would pull us away from an intimate relationship with our Heavenly Father.  Often times it is only in looking back that we see His hand at work and we realize He knew what He was doing all along.
Of course, not every disappointment is a result of God’s providence.  Sometimes they are the result of our own behaviours, disobedience, and attitudes.  However, as long as we sincerely trust our lives into the Lord’s care, like the sheep under the watch of a faithful shepherd, we can rest comfortably in the fact that He is guiding our steps while working things out on our behalf. The Psalmist reminds us, “The LORD guides us in the way we should go and protects those who please Him” (Psalm 37:23, GNB). And yes, that includes closing a few doors just as we are about to go through them.